Behind those placid faces at bus stands, or harried steps towards the Metro rail, or even the smug arrogant faces behind the car wheels, the ubiquitous Indian commuters are getting restive 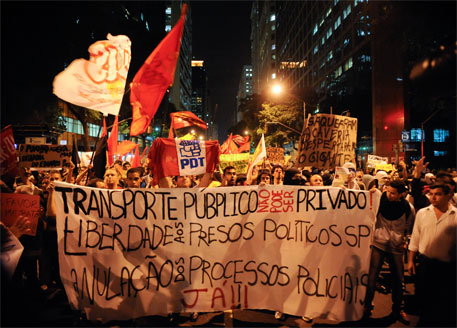 While watching the mob fury on the streets of São Paulo on television recently I was stunned to see how bus fare hike could stoke such urban discontent. The outrage over nine per cent fare hike had ignited over million demonstrators in hundred cities across Brazil. This one trigger ripped open myriad of grievances and stirred a political storm. I thought of India. Is mobility crisis in our cities a ticking time bomb?

What is the mobility story in Brazil? The Latin American media and the fiery blogs say that in a country with great part of their urban majority earning bare minimum wages, a bus fare hike that small “packs a punch”. As much as a quarter of the annual income of many São Paulo residents is spent on transport. Political indifference towards the transport needs of the poor hurts.

When 'haves' join 'have nots'

There is a twist in this story, though. It is not about only the poor or the massive fissures of social inequality. Many Paulistanos protesting on the streets today are from the rapidly growing middle and upper income class. They are influential pressure groups who want improved but affordable public transport services. This new political constituency is a result of the way travel choices have changed in the city. According to the Urban Age study of the London School of Economics, the share of car trips in São Paulo was 48 per cent of all motorized trips in 1997 that sharply rose to 53 per cent by the turn of the decade. But after 2007 this dropped significantly to 45 per cent—below 1997 level—as public transport and services improved. The share of bus ridership also shot up to 55 per cent.

The middle class is finally abandoning cars in a region where traffic jams are known to stretch beyond 130 miles! These “Haves” are part of the angry mob today because car-crowded roads of São Paulo are so slow that commute time for both rich and the poor has increased significantly since 1990s. Reportedly, the gap between time lost for poor and rich is narrower. The only way the Brazilians can escape the snarl and snail speed is to board a bus or a train. Or like the wealthy residents, zip zap on helicopters. Dotted with helipads, this city has one of the largest helicopter fleet in the world!

This newly emerging transit-oriented middle class is also the product of the investments in public transportation. Since 2005, about 75 per cent of the 15,000 buses in the city have been replaced by newer buses. São Paulo has 113 km of bus rapid transit (BRT) as well as good train network. According to the C40, a network of global cities, the city is targeting a modal share for bus transport of 70 per cent by 2020. Faced with the formidable users of these systems, the Brazilian government had no choice but to roll back the fare hike to buy peace.

How does this resonate in India? In our cities the car-owning community still thinks—as perhaps the Brazilians did during the last decade—their cars can keep them efficiently mobile forever. So they gun down any proposal to dedicate road space to buses, pay more for parking, and sulk if road widening and flyovers are held up. The sizeable numbers who still use buses are largely those without options and voice.

It is foolish to ignore the writing on the wall.  Behind those placid faces at bus stands, or harried steps towards the Metro rail, or even the smug arrogant faces behind the car wheels, the ubiquitous Indian commuters are getting restive.  How soon will the politicians sense the pulse of the commuters, who feel the pain but are not articulating the need for better quality and reliable services and well-linked modes?

Cost of commuting is increasing in Indian cities. National surveys show households are spending more on transport. The recent hike in fuel costs has upset the budget of bus corporations so much that many cities are resorting to automatic bus fare revision to adjust to the change in input costs.

Bus fare in India is politically sensitive but public transport in not a serious political agenda. Bus fare hikes trigger political protest from the opposition parties but only to gain brownie points as in Kolkata, Bengaluru, Hyderabad, Delhi or Pune. There is no political demand for improved public transport service guarantee or a paradigm shift.

The political economy of affordable mass transport is challenging. There is the sea of humanity—75 per cent of the bottom rung who earn less than Rs 80 (US $1.30) a day, whose mobility rights will have to be secured. On the other hand, the emerging seeker class is increasingly getting frustrated with unliveable urban environment and beginning to demand change. There is a political premium to quality of life in our cities.

Our cities cannot afford to delay decisions to roll out affordable, modern, comfortable, and accessible public transport. It will certainly cost a lot of money. But city governments must find ways to fund the transition and still keep the services affordable and not pass on the entire cost to the users of public transport. Let the city governments cut down on inefficiency costs, increase budgetary allocation for public transport, get more from advertisement and parking revenues, make cars pay more for public good and tap additional resources through innovative financing schemes such as land value capture and more for the big buck.

Let us accept finally—bus fares must remain affordable for the urban majority and this will need subsidy. There is no reliable mechanism to deliver targeted subsidy for bus transport to the urban poor. Moreover, economics of mass mobility is such that daily commuting costs for all urbanites must remain affordable.  So find a solution to make it happen. Only this can be a game-changer and reduce automobility to make our cities liveable.

Our cities are already facing harrowing daily struggle of the commuting masses to cut the costs of mobility—high prices, pollution, congestion and poor health. Learn and act quickly before their frustration shortens the fuse and the wealthy try to turn our cities into a giant helipad.