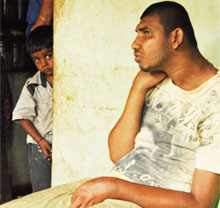 The agriculture ministry, on behalf of the centre, has recommended that endosulfan be allowed in the country instead of disposing it.According to the affidavit filed by the centre, in the Supreme Court, the cost of disposing endosulfan will cost the exchequer Rs 210 crore.

The Supreme Court had banned the manufacture, sale, use and export of endosulfan in India on May 13, 2011. The court had later allowed exports of the stocks but the ban on its use, manufacture and sale within India continued. In April this year the pesticide manufacturers once again appealed to the apex court that they be allowed to manufacture endosulfan from the stock of raw material, Hexachlorocyclopentadiene (HCCP), available with them and use it within the country. The court ordered the centre to revert with a disposal plan of the banned pesticide. The centre was given a three-month deadline.

"The cost of disposal of live stock of endosulfan by incinerationshall be more than Rs 210.82 crore, whereas phasing out would not onlyresult in saving this huge amount on disposal but would also save theproduct (stock) worth Rs 31.36 lakh, which would contribute toincreased crop production," the agriculture ministry wrote in the affidavit.

“It is evident that the centre has completely ignored public health despite acknowledging the fact that endosulfan is a persistent organic pollutant. By permitting the production of endosulfan from the present stock of HCCP (2657.96 MT), the government is seeking permission to produce almost 40 lakh litres of endosulfan. This is cruel,” said Mohammed Asheel, the assistant nodal officer of Kerala’s Endosulfan Rehabilitation project.

Apart from endosulfan, HCCP is the raw material for pesticides like chlordane, heptachlor, aldrin and endrin.  All of these have been banned from manufacture, sale and use in India.

The Court also wanted to know the total quantity of endosulfan- HCCP, technical and formulation—available in the country and the disposal plan for these stocks. The agriculture ministry in the last three months held consultations with the Ministry of Environment and Forest (MoEF), Central Pollution Control Board (CPCB), Department of Plant Protection, Defence Research and Development Organisation (DRDO) and the endosulfan manufacturers.

The total stocks available in the country are as follows:

They centre has recommended that no further exports of HCCP be allowed in the country. However, the endosulfan manufactures shouldbe allowed to manufacture endosulfan, with the available stock of HCCP, and sell it within India except Kerala and Karnataka.

The agriculture ministry said that all the states were willing to use the pesticide, as it was a cheap broad-spectrum pesticide very popular among farmers. The interim report, of the Supreme Court appointed joint committee, submitted in September last year reported that the pesticide was "safe to pollinators withoutany ill-effects on human beings, animals and environment".Earlier this year, Gujarat, Maharashtra and Andhra Pradesh had filed an affidavit in the Supreme Court requesting permission to use endosulfan.

The permission to manufacture and sell the pesticide, from the livestock, will be in accordance with the Stockholm Convention. India is a signatory to the Stockholm Convention and India has been allowed the use of endosulfan under specific exemption. According to the phase out plan the country gets five plus one year along with an additional optional five years to phase out its stock. During the phase out import of raw material is stopped and the available raw material is used to manufacture the end product.

“Why the hurry to begin manufacture? If we do not have the technical capability to dispose the pesticides or the raw material, then the government should ensure that the chemical is stored safely, indigenous methods of disposal is developed and then the stocks are disposed,” said Asheel.

Kerala launched Operation Blossom Spring, on June 17, to dispose the obsolete stocks of endosulfan lying in the godowns of the Plantation Corporation of Kerala estates in Kasaragod district. The samples from the godowns have been sent to the Hindustan Insecticides Limited and the results are awaited. Once the state of the obsolete stocks is known, a decision will be taken on how to dispose it. 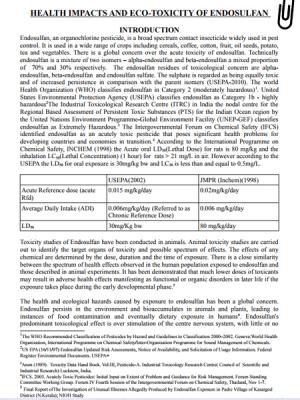 Report On Health Effects Of Endosulfan And Progress Of Rehabilitation Activities In Kerala" by Govt. of Kerala April 20, 2011

Disposal of Endosulfan begins in Kasaragod

Letter to all states (except Kerala & Karnataka) by Additional Secretary, Ministry of Agriculture, Government of India April 27, 2011

Synopsis of Literature on Health Effects of Endosulfan

How to Grow Crops without Endosulfan - PAN Germany

Gazette notification for restriction on use of Endosulfan in the cashew plantation area in the State of Kerala December 13, 2005

'SLAPP'ed but will not submit

Final report of the investigation of unusual illnesses allegedly produced by endosulfan exposure in Padre village of Kasargod...

Health hazards of aerial spraying of endosulphan in Kasaragod district, Kerala: report of the expert committee