A different kind of black gold

Jhabua is home to a unique indigenous poultry breed called the Kadaknath. The tribals value the breed for its cultural as well as its health values and also consider it sacred. The bird is high in iron and amino acids and low in fat. It tolerates extreme heat and cold climatic conditions and requires minimal management inputs. The breed is disease resistant and is valued for the quality and flavour of its black meat. It is also locally known as Kali masi because the bird is black inside –out – skin, feathers, legs, meat, blood, etc. 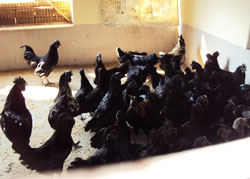 The breed which was earlier found in the entire tribal area of Jhabua, Alirajpur and Dhar districts is now to be found only in Jhabua and is under threat of extinction. The introduction of exotic foreign breeds and the resultant disease outbreaks have brought the pure kadaknath breed at the doorstep of extinction. Moreover, Kadaknath birds lay only about 90 eggs a year and also do not hatch their eggs. Tribals use desi hens to hatch these eggs. The fact that these birds are valued for their meat and lay few eggs has also contributed to the depletion in numbers. A year-old hen is sold for Rs. 250 – 300 as against Rs. 150 for a desi hen and a Kadaknath eggs sells for Rs. 4-5.

The government of Madhya Pradesh as well as the central government has launched schemes to propagate the breed and at the same time provide livelihood to the poor and tribal populations in Jhabua. Under these schemes, ST individuals are being provided with sheds, chicks, feed etc. We saw several small units funded by State Bank of India or NABARD for the promotion of these hens.