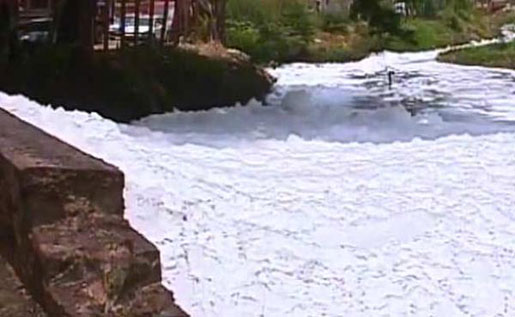 NEW DELHI, May 2, 2015: Taking note of the recent phenomenon of foaming of lake Varthur in East Bengaluru, Centre for Science and Environment (CSE) said on Friday that the city’s as well as urban India’s wetlands were under serious threat. The foam is the result of the water in the lake having high content of ammonia and phosphate and very low dissolved oxygen. “Essentially, this is caused by untreated sewage flowing into the lake,” said Sushmita Sengupta, deputy programme manager with CSE’s water team. “Delhi-NCR and many other cities across the country face similar foaming in their rivers and other wetlands on a regular basis.”

CSE research shows that untreated sewage and industrial waste from much of the city flows into the lake, leaving it extremely polluted. Even though the ministry of environment and forest and climate change has issued rules for conservation and management of wetlands, under the provisions of the Environment (Protection) Act, 1986, the Wetlands (Management and Conservation) Rules, 2010,  the discharge is not being monitored across water bodies throughout the country.

There is a plethora of acts and policies which indirectly talk about the protection and conservation of wetlands. But these wetland protection rules do not have teeth. Moreover, the wetland which is protected is identified by the state government. “If a wetland is overlooked by the state government, there is no mechanism except going to court,” says Sengupta. An example is the Badkhal lake in Faridabad over which a petition was filed in the Supreme Court in 1995, which gave its verdict in 2009 by which time the lake was almost dead.

CSE has prepared a model draft regulation for the protection of inland wetlands (excluding the river channels except the cases where the channels feed the wetlands) of South Asia. The draft defines wetlands, emphasises creation of data on wetlands and also stresses that existing customary rights and management practices in the wetlands will be recorded at the time of mapping these water bodies. The document also stresses empowering local communities to participate in management, conservation and restoration of wetlands through local government agencies in rural areas and through local municipal bodies in urban areas. The draft calls for creation of a Central Wetland Management and Conservation Authority.

On February 9, the Legislative Assembly of Karnataka passed a Bill to create an authority for management of lakes in the state. The Karnataka Lake Conservation and Development Authority Bill (2014), recently signed by the governor, provides for a Karnataka Lake Conservation and Development Authority. Though the state already has a Lake Development Authority (LDA), it has not been able to check the decline in the number of lakes or the deterioration in the quality of water because it lacks legal power. While LDA was not even empowered to remove encroachments, the new authority can remove encroachments, impose fines of Rs 10,000 to Rs 20,000 and imprison violators for three to five years. Even LDA officials agree this is the most crucial part of the new Bill.

CSE has learnt that the number of lakes in Greater Bengaluru has drastically reduced due to human factors. From 207 lakes in the 1970s, the number reportedly came down to 93 in 2010. Research predicts that if the urban sprawl continues to grow at the current rate, Bengaluru may lose its water bodies, green cover and open spaces by 2020.

CSE believes that community participation is critical to managing of wetlands. “Communities need to be involved in identifying wetlands which would be managed and protected while government bodies monitor and impose penalties on offenders including municipal bodies and industries,” said Sengupta.