Says the world must reset its goal to limit global warming to 1.5°C from 2.0°C

India must take the lead in this endeavor

New Delhi, October 8, 2018:“Even at a little over 1.0°C warming, India is being battered by the worst climate extremes – it is clear that the situation at 1.5°C is going to worsen. The new report from the Intergovernmental Panel on Climate Change (IPCC) has served us a final warning that we must get our act together -- now and quickly,” says Sunita Narain, director general, CSE, in response to the release of the Panel’s latest study.

The IPCC, the biggest scientific body feeding climate science to policy-makers, released today its Special Report on impacts of global warming at 1.5°C; the report documents glaring evidence of the devastating impacts of climate change on the poor and on developing countries. CSE has done a detailed assessment of the findings of the Report (www.cseindia.org).

Says Chandra Bhushan, deputy director general of CSE and head of its climate change unit: “The report makes it clear that the impact of 1.5°C warming is greater than what was anticipated earlier. Accordingly, the world would witness greater sea level rise, increased precipitation and higher frequency of droughts and floods, hotter days and heatwaves, more intense tropical cyclones, and increased ocean acidification and salinity. Countries like India, with large populations dependent on the agricultural and fishery sectors,would be highly impacted.”

While a 1.5°C rise in global temperatures will be precarious, a 2°C rise would be catastrophic. The report points out that the risk transition from 1.5°C to 2°C is very high and that the effects at 2°C will be more devastating than what IPCC’s Fifth Assessment Report had indicated. Coastal nations and agricultural economies like India would be the worst affected. Decline in crop yields, unprecedented climate extremes and increased susceptibility could push poverty by several million by 2050.

Considering the grim warning of the IPCC Report, CSE has appealed to the world to focus exclusively on limiting warming to 1.5°C instead of 2°C, which is the upper limit of the temperature goal mentioned under Paris Agreement.

Says Bhushan: “The world cannot afford a warming of 2°C above the pre-industrial era. A 2°C warmer world will devastate economies and ecosystems and push hundreds of millions of people back into poverty. The goal of climate change now must be firmly fixed to 1.5°C to give the communities and nations a fighting chance to avoid the worst impacts of climate change. India must take the lead in creating a global coalition in this endeavor.”

The report also makes it clear that the current level of climate ambition, as set out under the Paris Agreement, will lead to disastrous effects on the planet as it is not in line with limiting warming to even 2.0°C. With inadequate climate efforts, global warming is likely to reach 1.5°C between 2030 and 2052. If global emissions continue as per the commitments made under Paris Agreement, the carbon budget (the amount of CO2 that the world can emit) for 1.5°C warming will be exhausted by 2030. In order to limit warming at 1.5°C, the world will have to reduce CO2 emissions by 45 per cent by 2030 from the 2010 levels and reach net-zero emissions by 2050.

“Though it will be very difficult in the current global economic system to limit warming to 1.5°C, but it is not impossible. This will require acting on all fronts to rapidlyreduce emissions by 2030. Without an active participation of the US, this will be impossible. In totality, how the rest of the world handles the climate rogue behavior of the Trump administration will decide whether the world meets the 1.5°C goal or not,” adds Bhushan.

By refusing to endorse the findings of the IPCC’s 1.5°C Report, the US has again given a clear signal that it would continue with its climate regressive agenda, which includes obstructing the work of the UNFCCC and promoting fossil fuels like coal and gas.

The way ahead
“Considering the urgency to rapidly decarbonise, the world needs a ‘Plan B’, as the Plan A -- the Paris Agreement -- will push the world towards catastrophic warming. India must take the lead in forming a global coalition for a 1.5°Cworld to save poor and vulnerable populations across the world including its own,” adds Bhushan.

“The focus must now be on how the world can build a coalition to support the massive transformation required to achieve the 1.5°C target. The developed countries must take the lead by rapidly de-carbonising their economies as well as by reducing consumption. The developing countries will have to pursue low-carbon pathways more vigorously and should limit the addition of fossil fuel assets,” adds Sunita Narain.

CSE has recommended the following urgent action to limit warming to 1.5°C:

For the Summary for Policy Makers, please visit http://report.ipcc.ch/sr15/pdf/sr15_spm_final.pdf 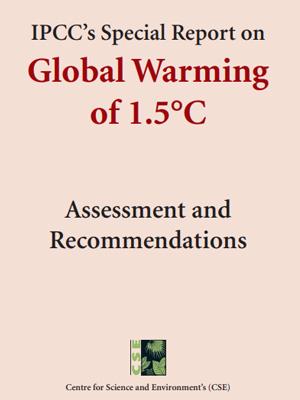