Non-communicable diseases (NCDs) are a major cause of concern around the world. According to the World Health Organization (WHO), about 40 million people die each year as a result of NCDs, accounting for 70 per cent of all deaths globally.1

NCDs include diabetes, cardiovascular diseases and some cancers. Along with tobacco, alcohol and physical inactivity, an unhealthy diet is strongly linked with NCDs, which are a major challenge in India. In 2016, risk factors such as unhealthy diet, high blood pressure, high blood sugar, high cholesterol and overweight contributed to a quarter of the total disease burden in India.2

For several reasons, the dietary habits of people, including children, are changing. Packaged food is becoming popular and people are eating more food cooked outside their homes. A common view is that excess consumption of food high in fat, salt or sugar (HFSS) is responsible for obesity and NCDs, with both fresh preparations and packaged foods often grouped together. But there is a difference between them not only with respect to the high levels of fat, sugar or salt—which can be controlled in a fresh culinary preparation—but also the low levels of micronutrients and dietary fibre and presence of chemical additives in packaged HFSS food. Further, packaged food items such as chips, instant noodles, soft drinks and chocolates are ultra-processed, aggressively marketed, cheaper and more easily available than fresh-food options. 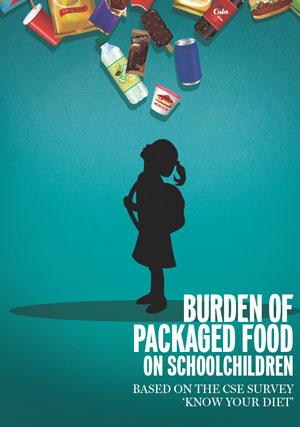