Celebration of Ganga Utsav in Bijnor

It was an intensive IEC campaign to promote awareness among various stakeholders in Bijnor municipality on promoting water conservation, rainwater harvesting, protecting the holy Ganga and other water bodies from Malasur&behaviour change communication among the community for sanitation and hygiene practices for making the Ganga clean.

Banners Used in the Ganga Utsav

An awareness campaign organized by Bijnor Nagar PalikaParishad with TSU-Bijnor to take oath and sign for promoting practices of RWH, water conservation and spreading awareness around avoiding disposal of wastes solid or liquid in the Ganga River. MrShamshad Ansari acting Chairman BNPP and Mr. Manoj Kumar Singh EO BNPP first took the oath and signed the campaign. The campaign was taken to Ganga Barrage in the second half where Mr. Kapil Dev Agarwal, PrabhariMantri Bijnor, SuchiChowdhary, MLA Bijnor, SakenderChowdhary, Jila Panchayat Chairman Bijnor,  Umesh Mishra District Magistrate Bijnor, and Vikramaditya Singh Malik, SDM Bijnor along with other 120 important dignitaries signed the campaign. The campaign was observed by 800-1000 persons in Bijnor at a different location. The campaign was appreciated by the ministers and government dignitaries. 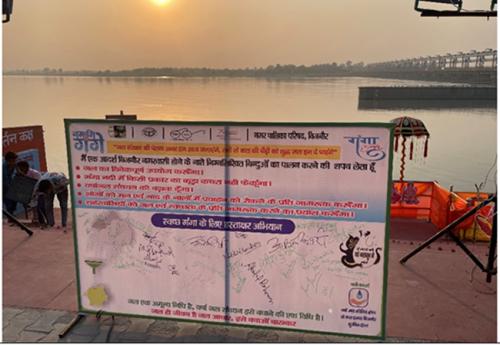 To highlight the importance of water conservation, RWH and abatement of Ganga River Pollution, TSU-Bijnor organized Light Diya for River Ganga- Deep Yagyaprogramme withGayatri Temple on Ganga road Bijnor. The programme started with a small Yagyain which all the locals took oath for curbing Ganga Pollution and wastage of water.

Women of around 70 households from the vicinity participated in lighting diyas for the awareness campaign. All the participants took oath to adopt water conservation practices at home and deploy RWH structures wherever possible. Local women also promised to start with saving two buckets of water daily.

TSU-Bijnor along with BNPP conducted a poem competition for young poets of Bijnor. Two age groups 11-15 and 16-20 years are kept three prizes viz, 1st prize INR 1500, 2nd Prize INR 1000, and 3rd Prize INR 500, will be given in both categories.
The topics for writing poems are kept based on water conservation, RWH and sources of Ganga Pollution in Bijnor. The idea for this activity was to highlight what a young mind thinks about pollution in the river Ganga, or water conservation, rainwater harvesting expressed through a poem.The results of the completion were announced on 1st December 2021 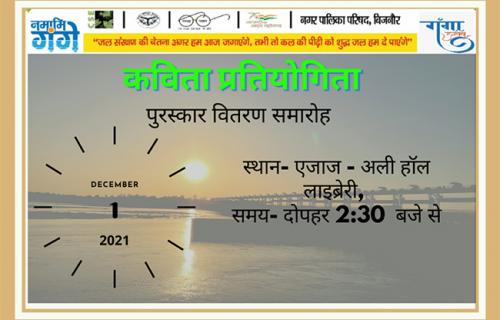 The award ceremony of the Poem Competition held in 70 schools in all over Bijnor block was organized by TSU-Bijnor in association with Bijnor Nagar PalikaParsihad. More than hundred poems were received for the completion in two categories viz., 11-15 years and 16-20 years.  A bench of three judges decided on the winners of the competition. The merits were based on the individual creativity and precise reflection of the topic in the poems. The award ceremony was held under chair of Executive Officer of Bijnor Nagar PalikaParishadMrManoj Kumar Singh.

Media Coverage of the Ganga Utsav 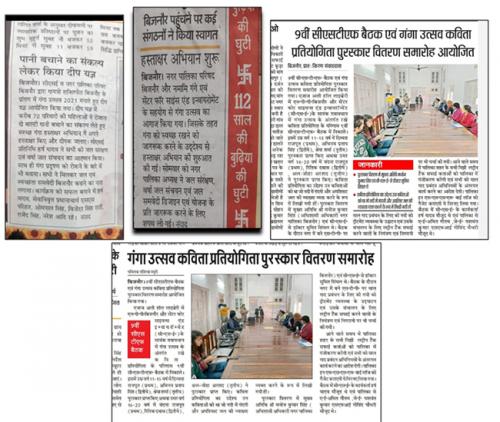