S.O._______(E).- WHEREAS the Central Government vide its notification number S.O.114(E), dated the 19th February, 1991, (hereinafter referred to as the said notification), declared Coastal Regulation Zone and imposed certain restrictions on the setting up and expansion of industries, operations and processes in the said Zones for its protection; AND WHEREAS, the Hon’ble Supreme Court in the Order dated 19th April, 1993 in Writ Petition No.664 of 1993, directed the Central Government and the coastal States that ‘There is 6000 km long coastline of India. It is the responsibility of coastal States and Union territories in which these stretches exists to see that both the notifications are compiled with and enforced’; AND WHEREAS, in compliance to the Orders of the Hon’ble Supreme Court, the coastal States and Union territory, prepared the Coastal Zone Management Plans which were approved with condition and modifications dated 27th September, 1996; AND WHEREAS, the said notification was amended, from time to time, based on recommendations of various committees, judicial pronouncements, representations from State Governments, Ministries and Departments of the Central Government, and the general public, consistent with the basic objective of the said notification. 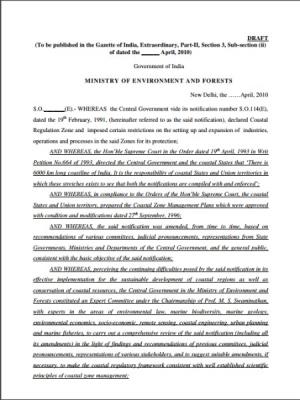