Harish Salve releases book based on the assessment 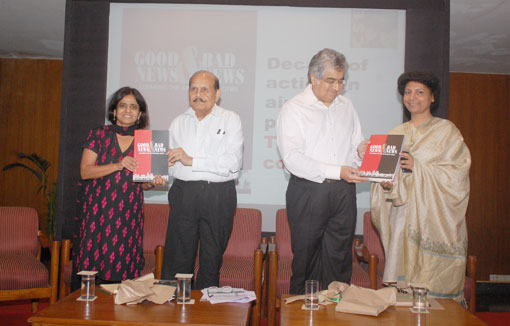 These factoids are from Good News Bad News: Clearing the air in Indian cities – a book which was released here today by Harish Salve, senior advocate of Supreme Court of India and the Amicus Curiae on environmental cases. The book has been published by Centre for Science and Environment (CSE).

Put together by CSE’s air pollution and sustainable urbanisation experts, the book provides a bird’s eye assessment of the cities of India and how they fare on parameters such as air quality, public transport, walkability, parking policies and fiscal initiatives.

“Air pollution has become the fifth largest killer, and the seventh biggest illness burden in India as per the Global Burden of Disease report, released in 2013. Data from the new cancer registry, released by the Indian Council of Medical Research in 2013, gives chilling evidence of the high incidence of lung cancer in cities. Rapid motorisation, the face of growth today, is also hurtling cities towards energy guzzling and heat trapping gases. This book comes at a critical moment in the ‘life-cycle’ of Indian cities – it helps us understand how cities are moving ahead or stalling their progress, and what could be a possible roadmap for progress,” said Sunita Narain, director general, CSE.

State of Indian cities
Smaller cities of India are experiencing a more rapid shift to personal vehicles, as they have not invested adequately in public transport. If two-wheelers are added to cars, the rate of personal motorisation in Indian cities has already exceeded that of the Western cities. Said Anumita Roychowdhury, executive director-research and advocacy, CSE: “Sprawls and flyovers are now increasing distances, while one-way streets, subways and foot overbridges are pushing people, hawkers and street activities out. On isolated roads, safety of people is compromised to protect the car. At the same time, road design to increase the speed of cars is adding to the accident risk.”

Taxes, fuel pricing and parking charges do not include the cost of damage cars impose on the society. On the contrary, the mass carriers like buses are made to pay more taxes for carrying more people as the government treats it as a commercial business, and not a matter of public good to be supported.

Added Roychowdhury: “We need measures to change urban design to make cities safe, more walkable, and public transport friendly.”   The CSE assessment has reviewed practices across the world, and finds that cities worldwide have started to take action to reverse the trend in travel choices. In Amsterdam and Copenhagen, the share of bicycle ridership has increased to 38 and 35 per cent, respectively, by displacing cars. New York is reclaiming space from cars to make pedestrian and public space safer, and it has one of the best public transport ridership among the US cities.

The most dramatic turnaround comes from the cities of China -- Shanghai, and Beijing have put a cap on the number of cars that can be sold in a year. Says Roychowdhury: “The experience in Beijing indicates the challenge of latent demand for cars; if allowed, it can bring the city to a standstill. Beijing now allows 240,000 new cars to be sold in a year, as opposed to 800,000 in 2010. But the actual demand is for 1,515,449 cars.”

Adds Roychowdhury: “These trends set us on a search for evidence of action, and change in Indian cities. What are cities doing to turn the tide?” As the book points out -- India has begun to reflect the rethink. The National Urban Transport Policy (NUTP) has set the principle that cities should plan for people, not vehicles.

The assessment finds that the “action in mega and big metros is more layered, diverse and extensive. This is partly because of the attention they have, investments they have drawn, and strident and aggressive public opinion and media pressure. Initiatives in smaller cities are often singular or limited in scope but with strong potential.”

Says Narain: “These are the ideas of change – however small and however insignificant they may seem today. They are the harbingers of a different tomorrow. The challenge now is to learn from these experiences and to upscale the practices so that once again, we can have the great leapfrog – move from cars to no cars. Move from pollution to no pollution.”

For more on this, please contact Souparno Banerjee at 9910864339 / souparno@cseindia.org.