New Delhi, May 10, 2010: Delhi faces serious pressures to clean up its air before the high profile Commonwealth Games in October - exactly the way Beijing did for the 2008 Olympics. Air pollution levels are daunting. Cutting these levels during the Games will need scale, stringency and frenetic pace of action to ensure that the public health benefits last beyond the event, says the analysis by Centre for Science and Environment (CSE).

According to Anumita Roychowdhury, head of CSE’s air pollution unit, “Clearing the haze takes on a specific significance in the context of the Games as athletes have to perform to potential, especially in extreme endurance events and they need clean air. With every breath, athletes typically take in 10 to 20 times as much air, and thus pollutants, as sedentary people.”

But environmental sustainability will have to be integrated with the planning for the Games for city-wide public health benefits. Air pollution is taking a heavy toll in the city. Studies carried out by the National Chittaranjan Cancer Research Institute have shown that 33 per cent of Delhi residents have one or more respiratory symptoms; lung function has reduced in 40 per cent of Delhiites. Studies from the Centre for Atmospheric Sciences of the IIT have found an increase in respiratory ailments and hospital admissions due to PM, ozone and NO2 pollution. More such evidences are piling up.

Delhi, like Beijing, has come under increasing pressure not only to lower the pollution spikes but also to meet the air quality standards. In fact, studies carried out by the University of Medicine and Dentistry of New Jersey and Peking University have found that the air quality improvement due to Beijing Olympics have led to health benefits in terms of respiratory ailments.

Delhi has already begun to take action in nearly all sectors to control air pollution over the past decade. It has relocated polluting industries; moved from Euro I to Euro IV emissions standards for vehicles; all buses, three-wheelers and a great part of taxis run on CNG; 15-year old commercial vehicles are off the road; transit freight traffic is restricted; controls on power plants are tighter; open burning of leaves is banned and so on. With this Delhi could only stabilize the pollution levels. But meeting clean air standards presents a very difficult challenge, as Beijing’s experience shows.

Challenges before the Games

What are the air quality challenges that the city will have to address before the games? CSE has analysed the air quality data monitored by Central Pollution Control Board and found:

Clearly, after relocating polluting industry and stalling further expansion of power generation inside Delhi, rapidly rising numbers of personal vehicles hinders clean air action in Delhi now. Vehicles are one of the key pushers of pollution in Delhi. All studies point towards high share of vehicles’ contribution to pollution load -- 76-90 per cent of carbon monoxide, 66-74 per cent of nitrogen dioxide, up to 22 per cent of particulate matter – more than half to 60 per cent if finer particles are considered. This demands stringent action on vehicles.

In fact the ecological code for the Games mentions categorically - “Reduce, measure and monitor air and noise pollution levels”. It seeks to strive towards achieving national standards for air pollutants, and encourage use of clean fuel-driven public transportation. Already, the report of the Commonwealth Games Evaluation Commission has stated that “mobility within Delhi is difficult and congested” and therefore, a “risk area”. The transport sector while emits most of the pollutants is also blamed for causing congestion on roads.

Delhi has already unleashed reforms and has a two-pronged plan: long-term structural reforms and short-term Games venue oriented measures. Will this help to address the pollution and mobility crisis?

To ease off traffic congestion in the city prior to the Games, the Delhi government has set off massive road infrastructure improvement that include projects on construction of flyovers, bridges, road widening, junction improvements, corridor improvement and street-scaping, new street lights, new signages, and construction of new parking sites.

But there are serious doubts whether this alone can succeed in providing any noticeable environmental benefits or relieve congestion. More road space brings more vehicles and more pollution. Even after having after 21 per cent of its land area under road network – one of the highest in the country -- Delhi is still gridlocked. Road availability is declining steadily as vehicle numbers are exploding; average peak hour traffic speed has plummeted. Vehicles caught in congestion emit more and guzzle more fuels. This is an endless spiral.

Delhi has a chance to plan its mobility differently. It has already embarked on upscaling of public transport systems with metro, bus augmentation plans, multi-modal integration, and expanding walk and bicycle paths. But this will have to be leveraged to reduce dependence on personal vehicles.

Delhi needs an effective public transport strategy to ensure that the benefits of the green Games last beyond the games.

CSE highlights the lessons from Beijing in its analysis -- that even after seven years of consistent and aggressive efforts, Beijing still found it difficult to ensure clean air during the Games and had to be ready with a contingent plan. Beijing actually removed three million cars from the roads during the Games.

Delhi must also be ready with an emergency plan for the Games and test it out before the event. The new monitoring and forecasting systems that are being put in place for the Games will have to guide this action. Planning for Games venues cannot be seen in isolation from the rest of the city.

Soft options are all exhausted in Delhi. Reducing personal vehicle usage, upgrading public transport, walking and cycling, and leapfrogging vehicle technology are the key options left for us. Scale and stringency of action and enforcement are needed for effective impact and to meet clean air targets.

Says Roychowdhury, “Only the compulsion to meet clean air targets can deepen public understanding of what it takes to protect public health. Only this can build public support for aggressive action needed for a green Games as well as long terms sustainability of the city.”

For more details, you can contact Priyanka Chandola on 9810414938 or priyanka@cseindia.org 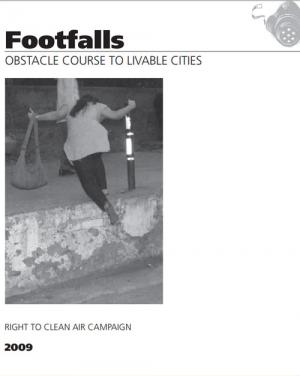