Centre for Science and Environment (CSE) released its report on profit sharing in Ranchi, Jharkhand on August 5, 2011. The report is a detailed analysis of the profit sharing mechanism, international practices being followed in different countries, the need for profit sharing, etc.

There is no doubt that the mining sector in the country today is of vital importance for several uses. But the sector also causes massive displacement of people. Our report discusses the social impact of mining and the need for profit sharing with the affected communities. It also suggests mechanisms in which this profit sharing can be practised in India.

The dialogue commenced with a presentation by Chandra Bhushan. He explained the concept of profit sharing, its prevalence abroad, advantages and the need for it. He went on to explain the provisions of the draft MMDR Bill, 2011 and their implications. He said, “It is important that we understand that profit sharing does not mean mining anywhere and in all circumstances. It comes into play only if the people agree to have mining in their area/on their land.” 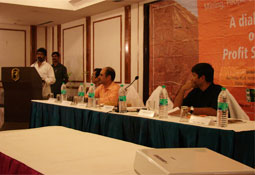 This was followed by Shri Soren's view on the profit sharing concept and the MMDR provisions. He supported the profit sharing clause and said its imperative that such progressive plans be implemented soon. He also assured that Jharkhand will actively participate in all discussions involving the MMDR Bill in future. Sudhir Prasad also supported the profit sharing provision but said implementation will be key to look at. Pankaj Satija extended his support to the concept as well but felt a little unsure about whether the money will be spent judiciously. This was followed by an open discussion. The release was widely covered by the media.