Over 1,000 schools vie for the awards; 40 per cent rise over last year's figure

New Delhi, February 7, 2018: “Indian schools, we find, are increasingly becoming conscious of their natural environments and resources, and the criticality of managing them sustainably. This is becoming evident from the growing numbers of schools which are joining our Green Schools Programme audit exercises and working seriously to make a difference,” said Sunita Narain, director general, Centre for Science and Environment (CSE), while inaugurating the Annual Green Schools Programme (GSP) award ceremony here today.

This year, 2,863 schools from 29 states and five Union territories registered for the GSP environmental audit. Of these, 1,193 schools submitted their completed audit reports to CSE. This points to a 12 per cent and 40 per cent jump in registrations and audit report submissions, respectively.

Thirteen schools out of the 34 shortlisted were presented the awards in various categories.

Narain told the gathering: “This year, we have found that the schools which claim to be green, are really and truly green. In this green exam, 54 schools have been assessed by CSE to be scoring an above 70 per cent mark. This is a big number, but we need more. We must walk the talk. We must – and will -- be the change. The possibility and hope that we see for this change is what excites us.”

Among the top winners of the 2017-18 awards are two schools from Kerala, and one each from Bihar, Haryana and Rajasthan (see below for details).

Elaborating on GSP, Ranjita Menon, programme director-environment education, CSE, said: “CSE’s Green Schools Programme awards schools in India every year for their resource-efficiency – low water use, energy efficiency, low waste generation, harvesting and recycling of water, and providing a healthier space for its occupants as compared to a conventional building. An online audit programme provides schools with a methodology to identify and plug the gaps in their environment management practices and move towards resource consumption.”

Menon adds: “This year, our assessment brings out encouraging figures – 119 schools use solar power, 434 practise rainwater harvesting, 269 treat their wastewater, 917 segregate waste at source, 581 practise composting, and 403 dispose off their e-waste responsibly by sending it to back to dealers, manufacturers or dismantlers.” 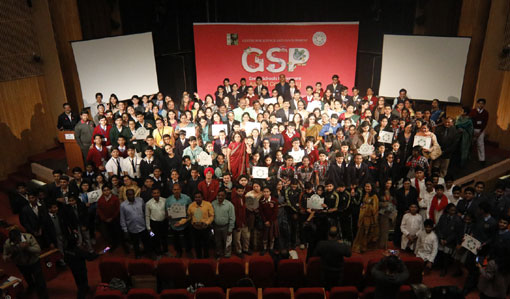 THE TOP ONES
Change Makers of the Year and what they have been awarded for:

Green cover: More than 50 per cent of the school area is under green cover.

THE TOP ONES
Awards in Individual Categories

41 other ‘green’ schools have also been recognised under the GSP programme, based on their overall performance in resource efficiency within the school premises.

The ‘New Entrant’ Category
The following schools have now registered to be a part of the programme and have demonstrated considerable potential in managing their natural resources:

Said Narain: “The future is in our hand to mould. We know our environment is imperilled. We can't breathe, we've destroyed our rivers. But the power is also ours to bring about change and therefore, the Green Schools network is an inspiration. These numbers that we have today show that the potential is there.”