Decentralised renewable energy is the solution to India's energy poverty 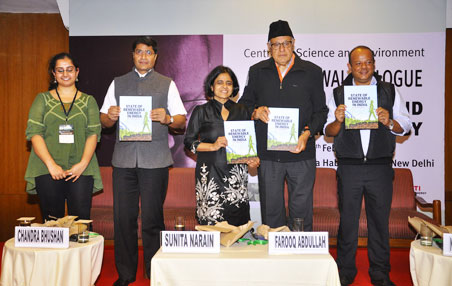 New Delhi, February 28, 2014: In India, 50 crore people have access to less than six hours of electricity every day; 70 crore do not have access to clean cooking fuel – in such a scenario, we need to understand how to mainstream clean energy and energy access across the country. Decentralised renewable energy systems could offer the key to solving this state of energy poverty, said Sunita Narain, director general, Centre for Science and Environment (CSE) in her opening remarks at the Fourth Anil Agarwal Dialogue on Energy Access and Renewable Energy, which concluded here today.

In the concluding session of the two-day Dialogue, Union minister for new and renewable energy, Farooq Abdullah, released CSE’s Citizen’s Report on State of Renewable Energy. The report looks at the current status of renewable energy in the country, as well as the issues that plague the sector. It also puts together the policy interventions in solar, wind, small hydro, biomass and waste-to-energy sectors.

Speaking at the inaugural session yesterday, B K Chaturvedi  had said: “It is only fitting that we remember Anil Agarwal with a discussion on energy access, a critical area for the poorer and under-privileged segments of the Indian society. It is they who suffer the most when appropriate energy access is denied or provided poorly to them for their sustainable economic growth.”

Chaturvedi also pointed out that the highest cause of premature deaths in India is due to asphyxiation because of household air pollution caused by cooking with bio-mass. Use of dirty cooking fuel has been responsible for killing 3.5 million women and children each year, according to a 2013 International Energy Agency report. According to Chaturvedi, India holds nearly 25 per cent of the global population without electricity and 31 per cent without clean cooking fuel.

Renewables: The agenda for change

CSE advocates a set of action points for the sector. These include, among others, the following:

• Putting in place an integrated policy and plans till 2050.

• The 12th FYP is not ambitious enough – India needs to go beyond those targets.

Said Narain: “Renenwables are expensive compared to fossil fuels today, but they will become cheaper tomorrow. The benefits of moving to renewables are immense – energy security, climate protection, reduced pollution and health benefits.”

• For any other queries, contact Souparno Banerjee on 9910864339, souparno@cseindia.org