Excreta does matter - A Knowledge sharing seminar in Khulna on Water and Sanitation, September 08, 2013

CSE organised a seminar on water and sanitation in partnership with Centre for Coastal Environmental Conservation, a Khulna based NGO.

The objective of the meet was to share the knowledge on urban groundwater, lake management and sanitation in India and Bangladesh. Every city in South Asia today extract more and more groundwater to meet their thirst. Water agencies formally indulge in extraction. Households do it privately, especially when the water supply agencies fail to provide them water. One consequence is the rapid decline in urban aquifers. The situation is frightening because planners have not acknowledged this and therefore, no city has an aquifer-recharge system in place. Ponds and lakes have been converted into real estate. Not only has this accelerated the fall in water tables, it has made cities more flood-prone. Another major challenge in South Asia, especially India and Bangladesh, is the lack of rural sanitation. In India, over half of the population defecate in the open because they are too poor, as the government schemes for promoting sanitation, to afford a toilet. CSE tried to focus on the key issues of water management and sanitation of both countries.

The first half of the meeting focussed on the key challenges associated with the city level recharge systems and conservation of lakes in both countries. This session was chaired by Tarun Kanti Shikdar, Director, Department of Environment. During the second half of the meeting a discussion was made on the status and challenges ahead in rural sanitation in Bangladesh, and what lessons it can provide for India. This session was chaired by Dr. Abdullah, Managing Director, Khulna Water Supply and Sewerage Authority (KWASA). 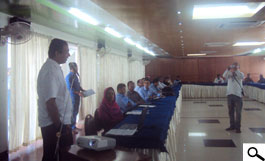 The chief guest of the programme was Prof. Alamgir, Vice-Chancellor of Khulna University of Engineering and Technology (KUET). He presented the key note paper. He focussed on the first implemented ecosan sludge management in Bangladesh. He also discussed on the initiatives on eco friendly latrines.  Dr. Abdullah, Managing Director, KWASA spoke about current situation and plan for water and waste management in Khulna city. Dr. S. M. Moniruzzaman, Associate Professor, KUET spoke on the state of groundwater in the coastal cities of Bangladesh and regulatory measures for sustainability. Prof. Dilip Datta, Environmental Science Discipline, Khulna University, discussed about groundwater recharge and rainwater harvesting in abandoned way of river (generally called Baor) in Khulna. He also discussed how the most important river of Khulna - Mayur river can be reclaimed . Dr. Tusar Kanti Roy , Assistant Professor, Department of Urban and Regional Planning, KUET focussed on the Importance of conservation of waterbodies in the coastal cities of Bangladesh. Dr. Md. Ashiq Ur Rahman Associate Professor Urban and Rural Planning Discipline, Khulna University spoke on the sanitation problems in the coastal areas and the upcoming technologies to solve these problems. Dr. Khondoker Mahbub Hassan, Professor, Dept. of Civil Engineering, KUET gave an overview of the policy framework and regulatory measures for sanitation in Bangladesh. Dr. Yasin Ali Sarder spoke about health impacts due to poor sanitation. 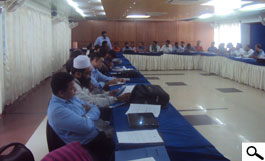 It was found that the issues and threats to groundwater sustainability and conservation of waterbodies in the coastal areas are common to both Bangladesh and India. There is no dearth of law for the protection of these wetlands yet, the country is failing to preserve its water wealth. Strengthening of the implementation of the regulation is the need of the hour. Bangladesh needs to strategies rainwater harvesting for the coastal regions. There was also need to improve on the sanitation of the country. It was also concluded that there is an immediate need to implement laws on the ground for the betterment of sanitation of both the countries.