Laboratory test finds pesticide residues in all cold drinks tested. Just as it had in bottled water six months ago. How hollow are the quality claims of soft drink multinationals? How can Indian consumers be saddled with sub-standard products? How can companies get away with such bad practices?

New Delhi, August 5, 2003: After bottled water, it’s aerated water that has plugged the purity test. In another exposé, Down To Earth has found that 12 major cold drink brands sold in and around Delhi contain a deadly cocktail of pesticide residues. The results are based on tests conducted by the Pollution Monitoring Laboratory (PML) of the Centre for Science and Environment (CSE). In February this year, CSE had blasted the bottled water industry’s claims of being ‘pure’ when its laboratory had found pesticide residues in bottled water sold in Delhi and Mumbai. 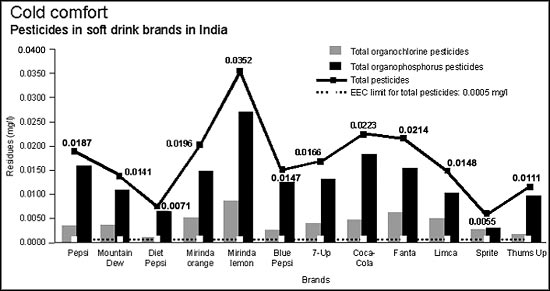 This time, it analysed the contents of 12 cold drink brands sold in and around the capital. They were tested for organochlorine and organophosphorus pesticides and synthetic pyrethroids — all commonly used in India as insecticides.

The test results were as shocking as those of bottled water.

All samples contained residues of four extremely toxic pesticides and insecticides: lindane, DDT, malathion and chlorpyrifos. In all samples, levels of pesticide residues far exceeded the maximum residue limit for pesticides in water used as ‘food’, set down by the European Economic Commission (EEC). Each sample had enough poison to cause — in the long term — cancer, damage to the nervous and reproductive systems, birth defects and severe disruption of the immune system. 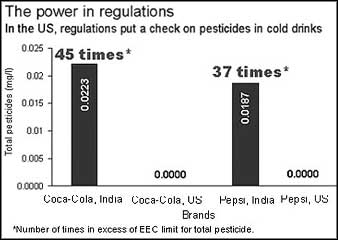 The cold drinks sector in India is a much bigger money-spinner than the bottled water segment. In 2001, Indians consumed over 6,500 million bottles of cold drinks. Its growing popularity means that children and teenagers, who glug these bottles, are drinking a toxic potion.
PML also tested two soft drink brands sold in the US, to see if they contained pesticides. They didn’t.

The question, therefore, is: how can apparently quality-conscious multinationals market products unfit for human consumption?

CSE found that the regulations for the powerful and massive soft drinks industry are much weaker, indeed non-existent, as compared to those for the bottled water industry. The norms that exist to regulate the quality of cold drinks are a maze of meaningless definitions. This "food" sector is virtually unregulated.

The Prevention of Food Adulteration (PFA) Act of 1954, or the Fruit Products Order (FPO) of 1955 — both mandatory acts aimed at regulating the quality of contents in beverages such as cold drinks — do not even provide any scope for regulating pesticides in soft drinks. The FPO, under which the industry gets its licence to operate, has standards for lead and arsenic that are 50 times higher than those allowed for the bottled water industry.

What’s more, the sector is also exempted from the provisions of industrial licensing under the Industries (Development and Regulation) Act, 1951. It gets a one-time license to operate from the ministry of food processing industries; this license includes a no-objection certificate from the local government as well as the state pollution control board, and a water analysis report. There are no environmental impact assessments, or siting regulations. The industry’s use of water, therefore, is not regulated. 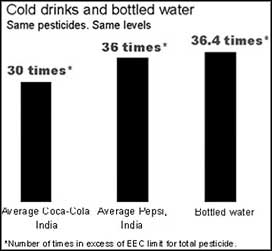 It is clear that the regulations have been designed in total disregard for public health. But what is unfortunate is that the global players — two giant corporations, who swear by the principles of corporate responsibility and global standards — have been caught in the act, taking advantage of the weak and nonsensical regulatory standards in India. Or, may we say, by fixing the standards to compromise our health.

To read the complete Down To Earth cover story; Download the complete CSE lab report; View the press conference presentation; or to view this Press Release online, download pictures, and e-mail it to friends