Raises the question whether health of Indians is unimportant for this industry, since globally the industry has worked differently

Find the Down To Earth story on the assessment here

May 5, 2020, New Delhi: In a latest assessment, Centre for Science and Environment (CSE) has revealed that fast food multinationals in India do not have any India-specific time-bound commitment to eliminate antibiotic misuse in their chicken supply chains. On the contrary, the global counterparts of most of these companies (such as in the US) are already serving chickens raised without administering medically important antibiotics – these companies had committed to do this.

“This is double standards. Indian fast food industry should be more responsible and stop antibiotic misuse. We must change how we produce food from animals to contain the growing crisis of antimicrobial resistance,” said Sunita Narain, director general, CSE.

Antibiotic misuse in raising chickens is known to lead to antimicrobial resistance (AMR), which is a global public health threat. Antibiotics are becoming ineffective to treat even common bacterial diseases and are failing when needed in an emergency. Their routine non-therapeutic use in intensive chicken farms to promote growth and in the absence of a disease is known to add to the growing burden of AMR.

Another big issue is the indiscriminate use of antibiotics, which are critically important for humans or are of last-resort for them.

In an earlier assessment done in 2017, CSE had found out that the Indian fast food industry was not eager to follow its global counterparts and stop antibiotic misuse. “We were worried about it and decided to reach out again to know the current status,” said Amit Khurana, programme director, food safety and toxins, CSE.

CSE researchers wrote to companies managing 14 popular brands selling chicken-based food products such as burgers, sandwiches, pizzas and wraps. Twelve out of these were foreign multinational brands -- eight of them did not bother to respond. These included brands like Pizza Hut, KFC, Taco Bell, Burger King, Starbucks, Chili’s, Wendy’s and Costa Coffee. But CSE’s research shows that companies operating these brands have made aggressive efforts to stop antibiotic misuse in chickens in countries other than India.

Similarly, by 2018, Starbucks had achieved the goal of serving only poultry raised without the routine use of medically important antibiotics in all company-operated US stores -- two years ahead of its schedule. Burger King has made similar commitments for the US by 2017 and Canada by 2018. Wendy’s completed the process of eliminating all antibiotics important to human medicine from chicken production in 2017 in the US.

Says Rajeshwari Sinha, deputy programme manager, food safety and toxins, CSE: “We found that in India, only one company has made a public commitment and shared lab reports when asked. Jubilant FoodWorks Ltd, which operates two brands, Domino’s Pizza and Dunkin’ Donuts, had a time-bound commitment made in 2017 to eliminate antibiotic misuse for non-therapeutic purposes and use of highest priority critically important antibiotics (HPCIAs).”

Hardcastle Restaurants Pvt Ltd (HRPL), which operates over 300 McDonald’s outlets across western and southern India, claimed in its reply that it was not using antibiotics for growth promotion or disease prevention, and was following a testing programme for antibiotic residues to ensure zero residues in the sourced meat. However, the company did not share its laboratory reports when requested. In the US, no chicken served in McDonald’s restaurants since 2016 is treated with antibiotics that are important to human medicine. HRPL says that it follows the McDonald’s global antibiotic use policy for broiler chickens -- this policy aims to eliminate HPCIAs in many countries in the next several years, but it does not mention India.

Subway is another fast food giant that does not have a time-bound commitment for India, whereas its US counterpart had committed in 2016 to serving chicken raised without antibiotics. The response from Subway in India points towards “global responsible use of antibiotics policy” and efforts towards eliminating misuse.

“Chickens are an important part of the menus of the growing fast food industry. The industry can play an important role by changing antibiotic use practices in its supply chain. It is time that fast food companies come forward with India-specific time-bound commitments to eliminate non-therapeutic use of medically important antibiotics. They must also commit to no-use of HPCIAs,” said Khurana.

For any related details and information: Sukanya Nair of The CSE Media Resource Centre, sukanya.nair@cseindia.org, 88168 18864. 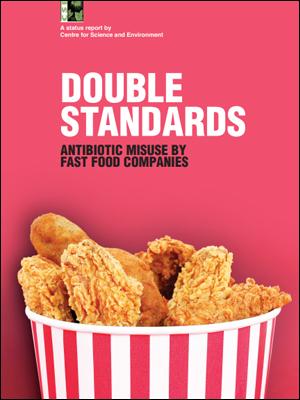