We are buying the world’s dirtiest fuel as if we have no worries of air pollution. This needs to change 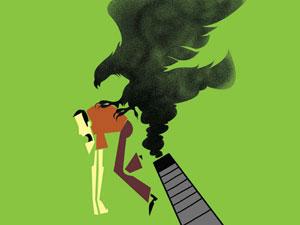 In Hinduism the god of destruction is more powerful than the god of creation. There is an environmental lesson here. Today we are creating stuff—and lots of it—which is not possible to destroy in our lifetime. Think of plastic or carbon dioxide emissions. Or think of pet coke, a petroleum industry by-product. It is extremely polluting because of its high sulphur content as well as emissions of heavy metals and mercury. In fact, it’s the pollution that has been transferred from one product to another.

Over the years we have progressively improved the quality of fuel for automobiles. To do this, the sulphur content in petrol and diesel has been reduced from 10,000 ppm in the mid-1990s to 50 ppm today. To meet BS VI vehicle emission standards refineries will further bring down sulphur to 10 ppm or lower. Only then can the after-treatment devices installed in vehicles work. We thought once this is done, the problem of air pollution will go away. Wrong.

The fact is that the same sulphur, which is removed from the fuel, ends up in the waste product, pet coke. There are no regulations for pet coke quality. Its sulphur levels are between 65,000 ppm and 75,000 ppm! This, when burnt, will greatly add to air pollution. It is just that instead of the tailpipe, emission will be emitted from the chimney.

The question then is what can be done with this by-product. The best would be to find a way to use it without adding to the pollution. But for this, we need to have a policy for pet coke. Currently, it is literally a black hole.

It is no wonder then that today pollution is the only business in which India is rivalling China. The latest Global Burden of Disease report shows not just the high levels of air pollution and early deaths in Indian cities—roughly 1 million a year—but also that the total number is matching China. Worse, while China is beginning to bend the curve on pollution, with the growth in the number of early deaths linked to pollution slowing down, ours is rising steeply.

This is the big difference between China and India. This is also where pet coke comes in.

In 2014, Chinese premier Li Keqiang declared war on pollution. China set targets for the reduction of coal power plants and now has also come down on the use of pet coke. It is clear from global trade information. China was the largest importer of pet coke from the US, finds the 2015 paper from the Carnegie-Tsinghua Center for Global Policy in Beijing. In 2013, US pet coke exports to China accounted for 75 per cent of its total and were as high as 7 million tonnes. It is also important to note that the US, with the world’s biggest oil refinery capacity, has massive pet coke to dispose of—some 36 million tonnes in 2014. This is increasing as the country is now refining more and more heavy oil, like the Canadian tar sands, which produce more pet coke by volume. The country’s new President Donald Trump’s approval of the Keystone XL pipeline, to bring more tar sands oil to the US for refining, means even more pet coke will be produced. All this will have to be sold in the global market.

That’s because the US is using less and less of its domestic manufacture, precisely because of pollution concerns. The country’s Environment Protection Agency has mandated rules for pet coke storage, as it fears contamination from heavy metals and particulates. The US is moving to cleaner natural or shale gas. And it needs to dump this dirty fuel on the world. With the Chinese getting smarter about their air, we are the takers of this fuel. We are buying the world’s dirtiest fuel as if we have no worries of air pollution.

So, what is the way ahead? First, we should ensure that we utilise our domestic pet coke and do not end up dumping it on others like the US does. But this also means we should stop the import of cheap pet coke. Second, we should use the domestic pet coke only in the industries where emissions can be controlled. For instance, in the cement industry’s clinker plants. But all other uses should be stopped.

More importantly, in this circular economy of the world, where products do not die but have to be reused, we have to be smart, very smart. We cannot be the dustbin of the world. We have our own garbage that is drowning us-and killing us, and not even softly anymore.