The public hearing for the expansion of Bhatin mines of Uranium Corporation of India Limited (UCIL) was held on May 26, 2011. The public hearing was a clear violation the EIA notification and did not allow stakeholders to participate in the process. CSE representative was there to cover the public hearing but was not allowed inside. Read on to know what ensued:

Around 35 inebriated henchmen of UCIL blocked the Tata-Jadugoda Road near Bhatin Colony to prevent environmentalists, environment activists, NGO workers and mediapersons from attending the Public Hearing scheduled on May 26 for renewal of the mining lease. Mediapersons and activists who protested to the road blockade were threatened with dire consequences. Three havildaars deputed on the spot expressed helplessness in paving way to help people attend the hearing.

In the morning, around 9 am, the UCIL management posed nearly 50 women near the Bhatin Colony gate to prohibit undesired entry of the mentioned group of people. Later, with the beginning of the public hearing around 11 am, the group of women was replaced by men.

Claiming themselves to be residents of Bhatin village, the people armed with batons and bamboo sticks said they were in favour of renewal of the lease. Clad in villagers’ attire, all the road-blockers had one thing in common: a badge with green ribbon mentioning ‘UCIL mine karmi’. Being interrogated the reason behind stopping the vehicles, frisking passengers and disallowing mediapersons from attending the public hearing, one of the supporters said, “We are residents of this area. We do not want any kind of outsiders’ interference here. We are aware of our needs and rights. So we would like to handle it in our own way.” On being stressed to let enter the gate to reach the public hearing site, one Sita Ram Manjhi said, “Anyone who crosses the gate will be responsible for his or her condition. We are politely requesting to go back. Now that we have absolute support of the UCIL management in blocking the road, I do not think police will take notice to the aftermath.” One havildaar said, “We are here just to take stock of the situation. If anything happens we will communicate to the higher officials and act accordingly.”

According to sources, about 1500 people attended the hearing. These were mostly women, children and employees of UCIL at a closed precinct inside the colony where the company received uncontested support for renewal of the lease. Apart from UCIL management, those present were Vijay Kumar, ADC (Law and Order) Jamshedpur, Dr M B Shukla of Bhabha Atomic Research Centre, R Chowdhary, regional officer (Jamshedpur), Jharkhand State Pollution Control Board, Jagdish Mahto and RamPravesh Kumar, Environment Engineer, JSPCB, Jamshedpur.

Dr Shukla said people should not protest against the lease as the radiations in the area are so less that it cannot harm any person. He categorically said, “The radiation is so less that the traces of radioactive elements found here could be found even in non-uranium mining areas too.” 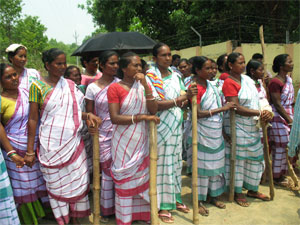 Himani Pandey, deputy commissioner of East Singhbhum, said, “I am unaware of the incidence of road blockade. However, I personally do not see any harm in allowing any person from attending the public hearing. Moreover, when the UCIL management and the scientists believe and are sure that there is no harm from radiations, they can easily convince people.”

At the Bhatin village, men and women who were against the renewal of the mining lease said UCIL had garnered support from other people by promising them work. “This is not the first time they are being fooled. Even a standard V student knows what the consequences of radiation are. This time UCIL has literally ‘bought’ people by slapping money on their face. Even our village ‘pradhan’ is in favour of the renewal,” said Raghu a young man of Bhatin village.

Interestingly, when the photographs of the people blocking the road was shown to the villagers they could not identify any of them. Bhatin Village Panchayat head Khelaram Murmu said, “Its UCIL that ultimately takes care of us. So why to go against them? I would prefer some progress of this area at the cost of uranium mining instead of poverty and joblessness.”