Have few minutes for a major mobility concern? - The Parking dilemma - How much to pay and for what?

This questionnaire is meant for a study aimed at preparing a MODERN, organised infrastructure for parking vehicles (cars, two-wheelers, bicycles) and also providing excellent walking and cycling facilities in and around the neighbourhood of Alaknanda Market. This would be done to remove the chaos from the market and make it more walking friendly with an orderly manner of parked cars and two-wheelers. This is important also to ease the flow of heavy traffic through the region on all sides. This questionnaire should not take you more than 10 minutes. We at CSE look forward to your valuable participation in making this research study profound and noteworthy.  Questionnaire form

Come out and claim the road

I write this column from my bed, recovering from an accident that broke my bones. I was hit by a speeding car when cycling. The car fled the scene, leaving me bleeding on the road. This is what happens again and again, in every city of our country, on every road as we plan without care for the safety of pedestrians and cyclists. These are the invisible users. They die doing nothing more than the most ordinary thing like crossing a road. I was more fortunate. Two cars stopped, strangers helped me and took me to hospital. I got treatment. I will be back fighting fit.

Smog has to be cleared

Losing after winning is the worst feeling possible. This is how I feel looking out of my window at a thick pall of black smog engulfing my city. It was this time of the year, exactly 15 years ago, when Centre for Science and Environment (CSE) began its right-to-clean-air campaign. The air in Delhi was so foul one could hardly breathe. That was a time when air pollution was an unknown curse. Not much was known about its nature and the toxicity of the air contaminants.

I write this stuck in traffic. Nothing unusual. But my location makes me realise, once again, how our highway route to progress is going nowhere. The road I am using is newly commissioned and expensive. It is the 28-km Delhi-Gurgaon Expressway, which was built just a few years ago to take care of the explosion of traffic between the two cities. It is access-controlled, with a 32-lane toll plaza, and was to provide easy access and a fun ride. The concessionaire—built as it is under the famous public private partnership model—took all steps to keep it prized for cars.

Supports the tax hike on big cars and SUVs But says budget is incomplete, as it has failed to take steps to stop misuse of diesel fuel subsidy by cars

The farmers of Singur in West Bengal are desperate to save their land from transforming into an assembly line for cars of Tata Motors priced at one lakh rupees (US$2222). While the state’s left front government is eager to oblige with cheap land deal, the Union government is ready with more tax cuts to shorten the fuse and set off explosion in car sales. In promising unconditional support our regulators forgot to ask about the product itself, -- an unusually cheap micro car – whose impact will reverberate much beyond Singur.

Just consider. Every time petrol prices are raised, oil companies end up losing more money. Simply because the price differential between petrol and diesel increases further, and people gravitate towards diesel vehicles. More the use of diesel, more the oil companies bleed. Worse, we all bleed because diesel vehicles add to toxic pollution in our cities, which, in turn, adds to ill health and treatment costs.

Parking that can't be found

Khan Market in boulevard Delhi is said to be the most expensive real estate in India, maybe even in the world. But in this richest shopping destination, buyers do not want to pay for parking their vehicles.

Before cars take over

There I was, zipping down bustling Ahmedabad. The bus stopped at a station, designed so the doors of the bus and the station open simultaneously to let passengers out and in. People were walking to the station, buying tickets and waiting. A notice flashed when the next bus would arrive. Each bus has a GPS device that transmits its movements to a spiffy control room inside the city corporation. You know when the next bus will come. It will be on time. 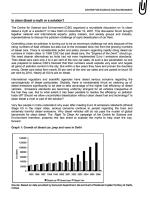 The Centre for Science and Environment (CSE) organized a roundtable discussion on ‘Is clean diesel a myth or a solution?’ in New Delhi on December 10, 2007.