Energy stories in Down To Earth

India will get ODF status by February 2019, but will it be a ‘cleaner country’? New CSE assessment says ‘no’

Are we assessing the movement correctly? – asks Sunita Narain 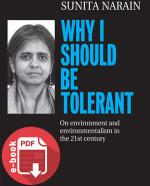 Why I Should be Tolerant

Telangana and AP welcoming industry with open arms, but does that augur well for the states? A Down To Earth investigation says no

Telangana and Andhra Pradesh have rolled out pro-industry policies that offer land, water allocations and other assurances to industry

Food for nutrition, nature and livelihood

What societies eat reflects their position on the modernity trajectory. Poorer countries have health problems because of lack of food. Then as people get rich, they end up losing the health advantage of food availability. They eat processed food that is high in salt, sugar and fat, which make them obese and ill. It is only when societies get very rich that they rediscover the benefits of eating real food and value sustainability.

Promise me the monsoon

Why this weird weather? Why have western disturbances—the extra-tropical storms that originate in the Mediterranean and Atlantic seas—been lashing us again and again, with devastating impacts on agriculture? Is this normal? Or has weird weather become the new definition of normal?

The Earth for you

Down To Earth is a product of our passion for change. But it would not have made it to its 23rd anniversary without your continued commitment. Our desire is to bring you news and perspectives on the state of the environment and explain why it needs attention. It is clear to us that as we produce each issue—this is 552nd edition—the struggle for a green, but prosperous, world is getting more intense, contested and difficult. It is also clear that if we do not have independent and credible sources of information, we cannot even begin to move towards resolution.

CSE welcomes the court’s directive in the 2010 PIL filed by Uday Foundation.

2014 has brought India’s environmental movement to a crossroad. On the one hand, there is a greater acceptance of our concerns, but on the other hand, there is also growing resistance against the required action. More importantly, every indicator shows that things on the ground are getting worse. Our rivers are more polluted, more garbage is piling up in our cities, air is increasingly toxic and hazardous waste is just dumped, not managed. Worse, people who should have been in the front line of protection are turning against the environment.

I write this with considerable impatience and one question. Do we really have the time to waste on controversies like what ancient India did or did not achieve by way of scientific discoveries? This is when there is the huge unfinished agenda to use the best of science to tackle current challenges and crises.