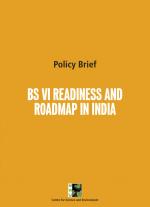 We discovered this by sheer chance, buried in the website of the Union Ministry of Shipping Road Transport and Highways. This is a public notice soliciting public opinion on the unfinished agenda of the emissions standards roadmap finalised way back in 2003. This seeks Euro IV standards in 11 cities and Euro III in the rest of the country by 2010. But this notification was not given adequate publicity in the popular media. It is not even aiming to stir a public debate and animated scientific discussion.