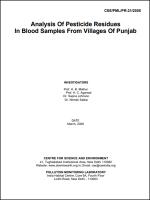 Punjab government on the slow track

After CSE raised the issue in 2005, the Punjab government constituted two committees, one was a High Powered Committee and the other an Expert Group. The two committees achieved nothing considerable- while the expert group held one meeting and the High Powered Committee none. The Punjab government ordered a study and immediate health remediation measures. Later, the government had decided to formulate the organic farming policy for the area but not much has happened there either.

Where poison flows in the veins…

CSE Study finds residues of 6-13 pesticides in blood samples of villagers in Punjab.