Threat to the Taj rears up its ugly head again 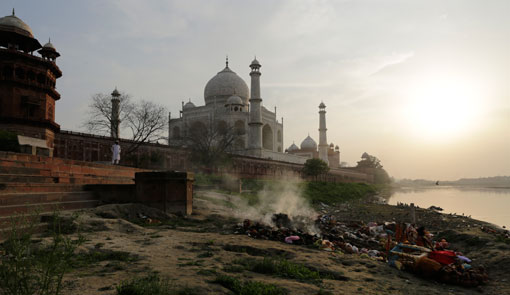 New Delhi, May 7, 2015: Even as measures – one after the other – are taken to stop the Taj Mahal from turning yellow, a recent analysis by Down To Earth (DTE), the science and environment fortnightly, says that the exact causes for the monument’s discoloration have not been established yet. “We will not be able to fix the problem unless we know the underlying cause,” says Down To Earth editor and Centre for Science and Environment (CSE) director general Sunita Narain. CSE helps publish Down To Earth.

Recently, in a knee-jerk reaction, the Agra administration has started mulling removal of all the makers of petha, the local sweet made from ash gourd – holding them responsible for the state of the Taj. The petha makers have been asked to either switch from using coal to LPG or shut shop; the move has left many people jobless.

Similar decisions in the past, when the administration has shut down industries without planning alternative means of livelihood, have led to a sharp increase in unemployment rates in the city. The question therefore, asks Narain, is whether this way is the right way.

What do studies say?

Recent studies have once again suggested that the scourge of pollution continues to adversely affect the white marble of the Taj. This time, it is not sulphur dioxide (which was suspected in the 1980s of turning the gleaming façade yellow). The villain today is black and organic carbon particles that are emitted from vehicles and other polluting units.

In 1996, the Supreme Court had observed that a “yellow pallor pervades the entire monument. In places the yellow hue is magnified by ugly brown and black spots and according to the petitioner the Taj is on its way to degradation due to atmospheric pollution.” This observation came despite studies which attributed the discoloration to reasons as diverse as microscopic algae, deposition of dirt, and application of resin used to preserve the monument – anything but pollution!

The 1996 Court order led to a range of measures to control pollution. But the continued discoloration has meant that either the Court’s orders remain unimplemented, or that “there is something new and different that needs to be addressed”.

So why is the Taj still under threat

The DTE analysis questions why should the Taj still be under threat. “In Agra and Mathura, vehicular traffic has increased manifold. The cities have not invested in public transport and even though compressed natural gas (CNG) is available, they have not made optimum use of this clean fuel,” says Narain.

She goes on to point out there are two serious issues staring at us: “One, we will not be able to fix the problem unless we know the underlying cause. Two, we will not be able to convince people of the actions that need to be taken unless we have information and evidence at hand. The fact is that poor people in Agra have paid a big price to keep the environment of the Taj clean.”

The DTE analysis lists the following grave threats that the Taj faces:

Visit www.downtoearth.org.in for the complete cover story on the Taj.