Water has been harvested in India since antiquity, with our ancestors perfecting the art of water management. Many water harvesting structures and water conveyance systems specific to the eco-regions and culture has been developed.

Paar is a common water harvesting practice in the western Rajasthan region. It is a common place where the rainwater flows from the agar (catchment) and in the process percolates into the sandy soil. In order to access the rajani pani (percolated water) kuis or beris are dug in the agor (storage area). Kuis or beris are normally 5 metres (m) to 12 m deep. The structure was constructed through traditional masonary technology. Normally six to ten of them are constructed in a paar. However depending on the size of the paar the numbers of kuis or beris are decided. Bhatti mentions that there are paars in Jaisalmer district where there are more than 20 kuis are in operation. This is the most predominant form of rainwater harvesting in the region. Rainwater harvested through PAAR technique is known as Patali paani.

Talabs are reservoirs. They may be natural, such as the ponds (pokhariyan) at Tikamgarh in the Bundelkhand region. They can be human-made, such the lakes in Udaipur. A reservoir area of less than five bighas is called a talai; a medium sized lake is called a bandhi or talab; bigger lakes are called sagar or samand. The pokhariyan serve irrigation and drinking purposes. When the water in these reserviors dries up just a few days after the monsoon, the pond beds are cultivated with rice.

An open well with multiple owners (saza = partner), saza kuva is the most important source of irrigation in the Aravalli hills in Mewar, eastern Rajasthan. The soil dug out to make the well pit is used to construct a huge circular foundation or an elevated platform sloping away from the well. The first is built to accomodate the rehat, a traditional water lifting device; the sloping platform is for the chada, in which buffaloes are used to lift water. Saza kuva construction is generally taken up by a group of farmers with adjacent landholdings; a harva, a man with special skills in groundwater detection, helps fix the site.

Johads are small earthen check dams that capture and conserve rainwater, improving percolation and groundwater recharge. Starting 1984, the last sixteen years have seen the revival of some 3000 johads spread across more than 650 villages in Alwar district, Rajasthan. This has resulted in a general rise of the groundwater level by almost 6 metres and a 33 percent increase in the forest cover in the area. Five rivers that used to go dry immediately following the monsoon have now become perennial, such as the River Arvari, has come alive.

Pat:
Bhitada village , Jhabua district of Madhya pradesh developed the unique pat system. This system was devised according to the peculiarities of the terrain to divert water from swift-flowing hill streams into irrigation channels called pats. 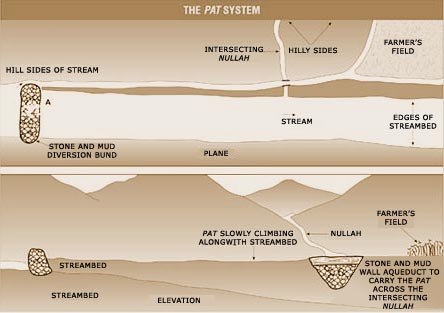 The diversion bunds across the stream are made by piling up stones and then lining them with teak leaves and mud to make them leakproof. The pat channel has to negotiate small nullahs that join the stream off and on, and also sheer cliffs before reaching the fields. These sections invariably get washed away during the monsoons. Stone aqueducts have to be built to span the intervening nullahs.

The villagers irrigate their fields by turns. The channel requires constant maintenance and it is the duty of the family irrigating the fields on a particular day to take care of the pat on that particular day. It takes about two weeks to get the pat flowing and the winter crop is sown in early November.