Analysis and assessment based on sulphur dioxide (SO2) emissions from plants

January 5, 2021: A new state-wise assessment of coal power procurement, done by Centre for Science and Environment (CSE), has found West Bengal to be number one state in buying the dirtiest coal power in the country in terms of compliance with sulphur dioxide (SO2) norms. According to the study, most of the stations supplying electricity to the state have not taken adequate measures to comply with December 2015 sulphur dioxide norms notified by the Union Ministry of Environment, Forest, and Climate Change.

CSE researchers have considered the progress made by power stations to meet only the SO2 norms as a measuring scale to identify the dirtiest power because limits on oxides of nitrogen have already been watered down, and particulate matter norms do not demand much changes in the system. It is the compliance with sulphur dioxide norms that has remained a daunting challenge that cannot be delayed. 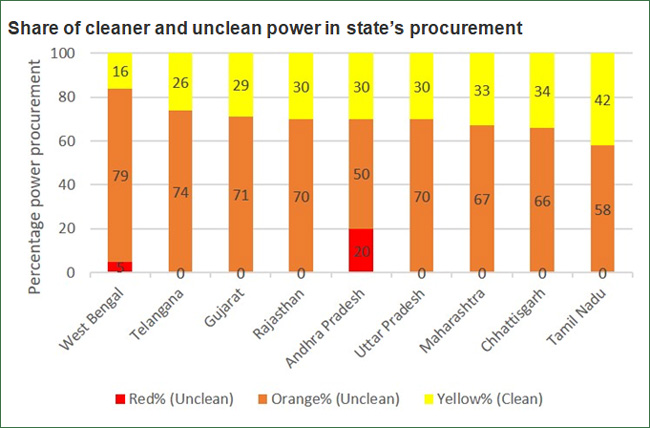 There is strong pressure to dilute the SO2 norms already. The Union Ministry of Environment, Forest and Climate Change (MoEF&CC) had stipulated norms to control particulate matter, SO2 and NOx in December 2015. However, the Union Ministry of Power is seeking further relaxation of the SO2 norms. Sulphur dioxide emissions from power plants is responsible for over half the anthropogenic emissions in India. Sulphur dioxide in the ambient air reacts to form more deadly secondary particulates in the ambient air.

Additionally, the CSE study has benchmarked the electricity procurement by states from different power plants to see if cleaner power is being procured. This is important as bottom-up pressure and demand for cleaner electricity from states can be an important catalyst to accelerate quicker transition to cleaner power without derailing time bound implementation of the new norms. This is needed under the National Clean Air Programme.

The assessment study
In its assessment, CSE has ranked the states and Union territories (UTs) based on the percentage tie-up they have with unclean coal power capacity. Thirty-three states procure electricity from coal-based power plants in India. These states have tie-ups with various coal-firing power generators which are at times located in different states also. CSE has accessed data for 162,091 MW capacity from the Ministry of Power’s website and has made an assessment of how much cleaner power a particular state is procuring.

Says Soundaram Ramanathan, deputy programme manager, industrial pollution unit, CSE: “We found that on an average, only 42 per cent of the tie-ups have been with cleaner coal power stations. In nine states, the tie-ups have been lesser than this average – West Bengal with 16 per cent stands out as the state buying the maximum amount of ‘dirty’ power.”

Of the nine states buying maximum unclean power, only Gujarat and West Bengal have the full authority to monitor the stations as these stations are located within their state boundaries.. The rest of the states have dual accountability of cleaning up both their own stations as well as ensuring stations supplying to them from other states are clean.

Says Yadav: “The penalty for non-compliance today is just a fraction of the fixed costs paid to power plants. This cannot push the sector towards compliance. The government will need to revisit and strengthen its deterrence mechanism – otherwise, implementing any environmental regulation will take decades.”

He adds: “The CSE study brings out the importance of increasing the state-level demand for cleaner electricity for local air pollution mitigation to keep the national agenda of time-bound implementation of new power plant standards on track. The positive action at the state level can make a big difference.”