What's your view of the road?

If we are not able to walk, we cannot really build a vibrant public transport network 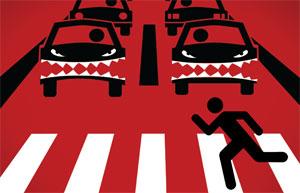 I have been on the road these past few days. It has been fascinating to notice the differences between roads and between cities. First, I was in Stockholm. Roads there are designed first for the people and then for cars. As a Delhi resident, I hesitated stepping on the road even at a zebra-crossing because I feared the car would not stop; it would run me down. I realised how deep-rooted our sense of insecurity is. Our road is not for walking.

In Stockholm, the pavements are also low. It makes for effortless walking. In my city, the pavements are high. It takes some effort to step onto them, making it difficult for all, and not just the old and the disabled, to move on foot. The reason given is if pavements are low, people will park their cars on it. But that is because we do not enforce regulations for illegal parking.

Then comes the priority: who has the right of way, cars or pedestrians? This is where I noticed a difference between Stockholm and the next city I visited and walked in, Washington DC. In Washington, as compared to Delhi, you are in heaven as a walker. From the moment, you get off a train or a bus you will find pavements, mostly accessible and connected, till you walk to your home, office or any other destination. The city is walkable but with a difference.

In Washington, you have to wait for long for the traffic signal to change before you can cross the road. If there is no signal and only a zebra-crossing, then cars don’t respect the walker. They let you pass, but with a grimace. Worse, when you cross the road, it is also when cars turning right or left also cross the same road. There is no right; it is a privilege. Car drivers tell you they are waiting. You scurry across as fast as possible.

In Delhi, when our streets were not roads, we could cross them. There was chaos, mixed traffic, everything on the street, but also safety for women because of numbers. The street was for walking and even talking. But then we moved to roads. The roads were designed for the efficient movement of just one kind of traffic: cars. As cars spilled over more space had to be created. This space came from footpaths. Delhi sacrificed its walking spaces. Now I go to other cities, where the same thing is happening.

Another difference between Stockholm and Washington is the width of the road. In Stockholm, roads are not highways. Cities are meant for easy movement. In Washington, road widths are huge. It feels as if highways cross the cities. This means as the light turns white for pedestrians, it requires running to cross. In Delhi, we are now building in such a manner that highways transect our cities. Ridiculous.

If we are not able to walk, we cannot really build a vibrant public transport network. Today, the Delhi metro—efficient and clean—would be my choice of transport. In fact, there are two metro stops within a few kilometres of my home and office. But I can’t walk. I can’t cross the road. I am unsafe when I walk as a woman. I am likely to trip over all the businesses that have taken over the footpaths where they exist.

The only part of my city that has footpaths is where nobody walks. In this part of Delhi, called Lutyens’ Delhi, where the government and the powerful live, the footpaths gleam. But just imagine, they are made with granite and polished so that you cannot walk. Or possibly for the powerful people to roll down the windows of their bullet-proof cars and feel good about their modern city.

The question is: what is your vision of what a road should look like? My colleague Anumita Roychowdhury, who works on mobility, will tell you that her most frequent conversation with decision-makers is exactly about this. What is their idea of a road?

On the one hand is the road—most frequently captured in photographs from the US or now even China and India—where cars move bumper-to-bumper. There is no diversity of vehicles. Few motorcycles, fewer buses and non-existent cyclists and pedestrians. On the other hand is the picture of a street in African cities or any smaller Indian city, where everything is moving side by side. Here people walk, cycle and take para-transit systems like auto-rickshaws. All side by side. This is seen as the chaos we would like to get rid of as we get rich, modern and successful. But, as Roychowdhury will tell you, a chaotic road carries more people and is, therefore, a much more cost-efficient instrument for mobility than the car-filled road.