When will Punna Bai get a toilet?

Of the one billion people that defecate in the open in the world, 638 million are found in India alone. In Badasilonia, a Nirmal Gram village, in Jhabua district of Madhya Pradesh, we inspected the toilet of Punna bai. The toilet or “latrine” as it is called, had only the four walls of the outer structure. On the opposite side of the road, we visited the house of the sarpanch. His toilet was completely and properly built and had an additional twin room for bathing. He also had a water storage tank close to the toilet. 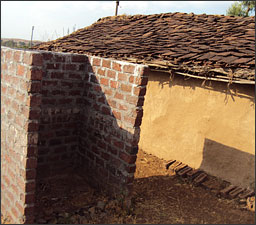 Although a Nirmal Gram village, there were only a few such incomplete superstructures in Badasilonia. However, Punna Bai was emphatic that she wanted a toilet. "What mistake have I done, why has my toilet not been built properly?” was her lament. “It would have been a big convenience, especially at night”. We could see that the hand pump was about 200 m downstream and the village women lug water three times a day carrying 15 litres balanced on their heads for every trip for their drinking and cooking needs. A toilet would have needed another trip. Yet, Punna Bai was willing to do this to bring water for her toilet.

On a tour of Jhabua and Ratlam, we took time off to look at the state of "toilets" in several villages -- Badasilonia, Khamripada, Ichathuni, Nepal, Jamli -- and spoke to women of the villages. In most villages, only the outer shell was constructed. In Jamli, a village that was clearly better off and had pucca houses, there had been no water supply for the past 2 months. Yet, the women said that they bought water from a tanker at Rs. 2/litre for their toilets, because that was a necessity. In Khamripada, the men folk came forward to talk to us about toilets. In this village of 180 households has only 20 households have been provided with latrines. They were vary happy with the idea of toilets near their huts and wanted toilets for everyone. In Ichathuni village in Ratlam district, another Nirmal Gram village, villagers don't use their toilets. A panchayat official contemptuously said that despite all the facilities and all the awareness programmes, villagers will never "correct" their behaviour. According to him, Ichathuni was completely covered in terms of sanitation, but he blamed the villagers for not using the toilets.

Compare this with the village of Didakhedi, a village in Sehore made up of largely SCs and OBCs, where Samarthan, an NGO had catalysed the community to come together and build an overhead storage tank, a piped water supply and latrines for every household. In Mahukheda, the Public Health Engineering Department had provided piped water supply and toilets for every household. The PHED had taken one step ahead and also undertaken water harvesting to ensure a sustainable supply of water.

The Total Sanitation Campaign was launched on October 2, 1999, with the aim of providing every rural household with a latrine. As of today, official statistics say that 67% of households have been provided with toilets. But if the  "Nirmal Grams" that we visited are any indication, the actual coverage would be far less.

Will Punna Bai get her “latrine” and when? If you look at the national policies outlines by the government, seemingly we have dream policies.  There is everything to catalyse the change – provisions for education, awareness creation, capacity building, access to hardware and new technologies and even allowing for community choices in design. Total sanitation coverage therefore, need not be a dream. Policies are in place; schemes for funding software and hardware are in place.

So, why can’t we do it? Gandhiji said, “Conservation of national sanitation is Swaraj work and it may not be postponed for a single day on any consideration whatsoever”. Is sanitation right on top in the pecking order of  priorities? Gone are the days when the excuse was that villagers did not want to use the toilets. Today, villagers welcome the idea of having access to a clean, private toilet that is close to their homes. So, why can’t we give them toilets? How do we bride the divide between central policies and implementation at village level? 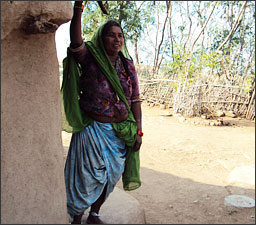 Also, what of toilet technologies? In the long run, the current soak-pit based systems, when they are improperly built, have the potential to contaminate the groundwater resources. In addition to arsenic and fluoride, we will have the additional problem of bacteriological contamination of groundwater, which was traditionally the best source of drinking water. The current water-based technology begs the question, “Where is the water?” We cannot afford to repeat the mistakes we have already made in the cities creating shortages and pollution of water.  Just sanitation coverage is not enough; we need to work towards sustainable sanitation that calls for  innovations in non-water based technologies.