The first Gobar Times Green Schools Awards were given away at Stein Auditorium, India Habitat Centre, New Delhi, on Monday, November 27, 2006. Students and teachers from various schools in Delhi and across India were present in full strength.

Prof. Krishna Kumar, director, NCERT, was the chief guest. He gave away prizes to the top 20 green schools, and spoke about environment education in the country. Sunita Narain, director, Centre for Science and Environment (CSE), also addressed the audience. Sumita Dasgupta, coordinator, CSE’s Environment Education Unit (EEU) discussed the findings of the rating, while Shankar Musafir, assistant coordinator, EEU delved into its methodology.

A photo gallery to show ‘Green schools in action’ was put up on the occasion. It had photographs of students and teachers working and collecting data for their respective Green Schools Report.

Besides, five schools had put up stalls on five major themes of the Green Schools Programme: 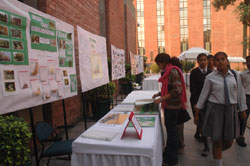 Apart from the 20 schools, which won the top honours, the following were short-listed for on-site visits/telephonic assessment: