Akashganga: The bounties of rain 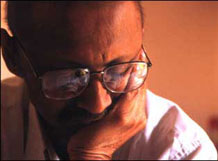 Rajasthan is a state that is perpetually short of water yet it developed a glorious civilisation even in the dry desert. Its ability to catch the rain for its survival and economic activities was highly developed, almost turned into an art form. Modern Rajasthan today needs to revive its own traditional skills and build upon them with the use of modern science and technology. The faster it does so, the easier will it be to meet the recurrent droughts it faces.

A mass movement for water harvesting can, over time, even become the spearhead for a major effort to eradicate rural poverty in the state. In the last 20 years several villages like Ralegan Siddhi in Maharashtra have shown that poverty alleviation begins with water harvesting. Once water is available, agricultural yields increase and become less susceptible to the vagaries of the monsoon, and fallow lands come under cultivation. Within a few years, once linked to their water resources, the people begin to appreciate the importance of their watershed and its management increases the tree and grass cover, leading to greater productivity of the animal population.    From an extremely destitute village, Ralegan Siddhi has become one of the richest villages in the country through good land and water management. The same story can repeat itself in every village of Rajasthan.

But to do this will require political determination. Water and land management means that a range of government departments – revenue, forest, irrigation, agriculture and animal husbandry – must work in close coordination and all together at the service of the people. The Madhya Pradesh government has been able to green highly degraded areas in the state through a highly participatory water harvesting-cum-watershed development programme. The programme has greatly benefitted the tribal population of the state in districts like Jhabua and was an important reason for the high tribal support that Digvijay Singh got during the last state election and surprised everyone with a victory that nobody expected. Except for the Thar desert, most of the other regions of Rajasthan are ecologically very similar to Madhya Pradesh and there is no reason why Rajasthan cannot undertake a similar programme. But the drive will have to come from no less than the chief minister himself.

All this has to be done well in advance of the dry season. Once the drought is there, all that a government can do is to provide some succour in terms of drought relief works, emergency water supply through tankers, digging deeper borewells for some residual water in the bowels of the earth, and provision of fodder to save the animal population. Seen in this light, droughts are nothing more than ‘man-made’ or rather ‘government-made’ disasters. Community-based rainwater harvesting – the paradigm of the past – has in it as much strength today as it ever did before. A survey conducted by the Centre for Science and Environment of several villages facing drought in Gujarat and western Madhya Pradesh last December found that all those villages which had undertaken rainwater harvesting or watershed development in earlier years had no drinking water problem whatsoever and even had some water to irrigate their crops. On the other hand, neighbouring villages were desperate for water and planning to migrate when the real summer hit them. This survey revealed that rainwater harvesting can meet even the acid test of a bad drought.

In late March 2000, we got further confirmation of our conviction. Going with president K R Narayanan in a helicopter to the Arvari watershed who was scheduled to give the Down to Earth-Joseph C John Award to village Bhaonta-Kolyala in late March, we could see nothing but barren fields all the way from Delhi to Alwar. This area was suffering from a second consecutive drought-year. But suddenly we came across green and brown fields and realised that we had reached the oasis of the Arvari watershed where several villages have, under the leadership of Tarun Bharat Sangh, over the last 5-10 years, built hundreds of rainwater harvesting structures. Nobody needed to emphasize the importance of rainwater harvesting any more. The president saw a more or less dead Arvari river, unable to withstand the burden of two years’ drought, but wells were still full of water and, therefore, fields were rich and productive.

What makes rainwater harvesting such a powerful technology? Just the simple richness of rainwater availability that few of us realise because of the speed with which water, the world’s most fluid substance, disappears. Imagine you had a hectare of land in Barmer, one of India’s driest places, and you received just 100 mm of water in the year, common even for this area, that means that you received as much as one million litres of water – enough to meet drinking and cooking water needs of 182 people at a liberal 15 litres per day.  Even if you are not able to capture all that water – this would depend on the nature of rainfall events and type of runoff surface – you could still, even with rudimentary technology, capture at least half a million litres a year. It is, in fact, only with this rudimentary technology that people came to inhabit the Thar desert and make it the most densely populated desert in the world. In fact, I have consistently argued that there is no village in India that cannot meet its basic drinking and cooking needs through rainwater harvesting.

India’s total land area is over 300 million hectares. Let us assume that India’s 587,000 villages can harvest the runoff from 200 million hectares of land, excluding inaccessible forest areas, high mountains and other uninhabited terrains, that still gives every village on average access to 340 hectares or a rainfall endowment of 3.75 billion litres of water. These may be back-of-the-envelope calculations but still the potential they show for rainwater harvesting is extremely powerful and undeniable. There is just no reason whatsoever for thirst in India.

Let us look at the relevance of village-based rainwater harvesting from yet another point of view. The key component of rainwater management is ‘storage’ especially in a country like India where the monsoon gives us on average about 100 hours of rain and then nothing for the remaining 8,660 hours in a year. This water can be captured in large reservoirs with large catchments by building large dams, in small tanks and ponds with small catchments, or by storing it in a way that it percolates down into the ground and gets stored as groundwater. Very little work has been done on rainfall-runoff relationships in arid and semi-arid regions of the world. And the studies conducted are showing that you can capture a lot more water per hectare of the catchment area if you collect it from small catchments rather than large catchments. This is because a lot of water gets lost in evaporation in large catchments.

Israeli scientist Michael Evenari, who can be described as the godfather of modern rainwater harvesting, first found clear scientific evidence of this effect in the 1960s. While a 1 ha watershed yielded as much as 95 cubic metres of water per hectare per year, a 345 ha watershed yielded only 24 cu m / ha / year. After years of research, Evenari found that large catchments gave even less water during a drought year. Similar results have since been reported from Indian and US scientists. This means that Rajasthan, a drought-prone state, should think of getting its people to make water harvesting structures by tens of thousands so that every drop of runoff is collected and recharged into the ground to keep the groundwater tables high.

In just ten years, Rajasthan can banish a lot of the acute rural poverty it suffers from today. The water is there. All that it needs is a political will for mass mobilisation for water. Rajasthan can once again build as glorious a civilisation as it had in the past. President K R Narayanan even called for a national movement for water harvesting in his 1999 Republic Day address to the nation.