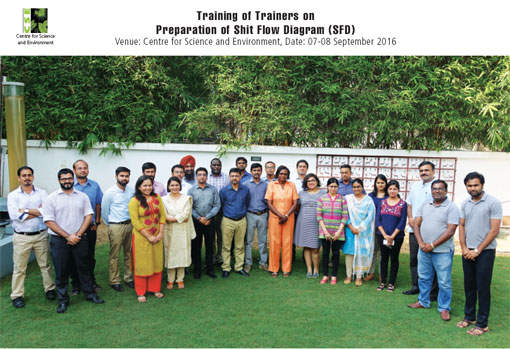 Water Programme team conducted a Training of Trainers (ToT), under SFD Promotion Initiative. The training was held from 7th to 8th of September 2016. The purpose of this ToT was to endow the trainers with SFD tool working in the WASH sector. The aim of the training was to capacitate sector plays and have multipliers who could use SFDs as an advocacy and intervention tool in septage management to achieve SDGs. There were 22 participants from national and international organisations. Four international participants were from Kenya Water Institute (KEWI) and Water Aid Bangladesh.

Date: 14 to 16 July, 2015 The Water Programme at Centre for Science and Environment (CSE), recently conducted a three day training programme on "Water Sensitive Design and Planning: Towards Sustainable Urban Development" on July 14-16, 2015. It was organized under the "Capacity Building of Urban Local Body" (CBULB) programme sponsored by the Ministry of Urban Development (MoUD), Government of India.

UP stands up for groundwater

In what could set a precedent for groundwater regulation across India, the Uttar Pradesh (UP) Ground Water Conservation (Protection & Development) Bill, 2010, recently unveiled a draft of the government’s plan to putting a price for water. The UP draft groundwater regulation bill, is the first to address big users of water – the bulk users from commercial and industrial enterprises.

Water PPPs: are they here to stay?

The Government of India conferred the National Water Conservation Award on Umakant Umarao, Director of the Rajiv Gandhi Mission for Watershed Management in March 2011 for his outstanding efforts towards water conservation. During his stint as the District Collector of Dewas, Umarao interacted with farmers to understand their problems and realised the importance of harvesting rainwater from some of the pioneering farmers.

What changes does drip irrigation bring to farming? Study: In a 2010 study, “Impact of Drip Irrigation on Farming System: Evidence from Southern India” by Tamil Nadu Agriculture University, researches examined the before-and-after effects of 50 farms growing bananas that switched from sprinkler irrigation to drip irrigation between 2007 and 2008 in the Coimbatore district of Tamil Nadu. The results are as follows:

Dating back 200 years, tribes in northeast India have used bamboo drip irrigation as a means of bringing water to seasonal crops. This timeless and traditional technology uses locally available material while harnessing the forces of gravity. An assortment of holed bamboo shoots zig-zag downhill, diverting the natural flow of streams and springs across terraced cropland.  The advantages of using bamboo are two-fold: it prevents leakage, increasing crop yield with less water, and makes use of natural, local, and inexpensive material.

The Big Thirst: The Secret Life and Turbulent Future of Water” by Charles Fishman is an exciting journey into civilization’s evolving relationship with water. Tales from across the globe, depicting relationships of abuse, dependence, and even worship are humbling and remarkably frightening.

Rain in a Bottle

Akashganga: The bounties of rain

Status of Water Quality in India-2009

A 2009 report by the Central Pollution Control Board (CPCB) titled “Status of Water Quality in India-2009” lists the most recent results from a water quality study using 1700 aquatic monitoring stations across India. Data retrieved from streams, rivers, lakes, tanks, and groundwater sources indicate that organic pollution, particularly Biochemical Oxygen Demand (BOD) and Coliform, are the major sources of pollutants.