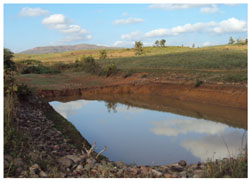 The Government of India conferred the National Water Conservation Award on Umakant Umarao, Director of the Rajiv Gandhi Mission for Watershed Management in March 2011 for his outstanding efforts towards water conservation. During his stint as the District Collector of Dewas, Umarao interacted with farmers to understand their problems and realised the importance of harvesting rainwater from some of the pioneering farmers. Phoop Singh was one such farmer who had constructed a farm pond to hold water for irrigation. Phoop Singh’s efforts at pond revival went beyond water and has contributed to the ecological restoration of the area --“in 2008, we saw Siberian cranes come to Dewas for the first time”, says Umakant Umarao with joy.  Inspired by this example, Umakant Umarao initiated the Bhagirath Krishak programme in Dewas district in 2006.  Farmers were incentivised to construct farm ponds that would capture and hold rainwater.

Dewas district in the Malwa region of the state suffers for acute water scarcity. Two out of the six blocks of the district fall under the grey area in terms of groundwater availability implying that any further exploitation of groundwater is not possible in these areas. With depleting water level, groundwater is normally available at 300 – 1000 ft in the district. Rainfall has been steadily declining. Irrigation is predominantly by tube wells but due to the falling groundwater levels irrigated areas have undergone a decline in the past few decades.

It was an uphill task for Umarao, to get the farmers to invest their own earnings into the construction of tanks. Farmers were so used to digging borewells for water, resisted the idea of constructing tanks that would eat away precious land needed for farming. The idea did not look viable enough to a large section of the farmers who feared losing their investment if the model does not work. Umarao realised that “The need of the hour was to make this idea a profitable business model which would get the farmers to contribute.” For farmers who could not afford putting in money from themselves, loans from local banks were provided. The collector persuaded the banks to provide loans to the farmers. The irrigation tank was called Rewa Sagar while the farmers were called Bhagirath Krishaks.

The district administration undertook an awareness drive to increase the sensitivity of the farmers towards the need for water conservation. With some bit of persuasion the district administration was able to identify some farmers who were willing to construct an irrigation tank. The economic model of water was explained to the people mentioning that they will get higher yield and thus greater incomes because of the investment they make. Jal Bachao – Labh Kamao (save water, earn profits) became the slogan to engage farmers into the programme. They were made aware of the additional benefits of constructing the tanks in form of reducing the dependency on power, which is erratic in supply and the cost of diesel.

Gradually farmers came forward in constructing the tanks and around 5000 tanks were constructed across the district. Some farmers have invested money in the range of 10-14 lakhs for constructing a tank in their fields. KPS Thakur, a farmer in Khategaon block had 200 acres of land but could irrigate only 100 acres due to the unavailability of water for irrigation. Erratic power supply and increasing costs of diesel added to his woes. On hearing of the Bhagirath Krishak programme, Thakur reluctantly constructed a tank in his field borrowing a loan of 6 lacs from the bank. The investment proved beneficial for him and within two years he was able to repay the loan. The productivity of his land increased three times with the assured availability of irrigation.

Stories like this are found across Dewas and other districts where farmers have become Bhagirath Krishak and constructed farm ponds in their fields. An impact assessment study done on the programme reveals that in areas where this programme has been successful, there has been an increase in crop productivity by almost 100-300 per cent and all the farmers have gone into double crop from the earlier single crop. The electricity consumption has reduced by 20-24 percent and there has been an increase in the groundwater table by 6-40 feet across the district.

Gradually the programme has been taken up in other districts like Neemuch, Mandsaur, Khargone amongst others. This was an entire self motivational campaign with the farmers. Realising the success of this initiative and to get small farmers into the programme, the state government launched a Balram Talab programme where subsidy to the tune of Rs. 80,000 was provided to small farmers and those belonging to the marginalised communities to construct an irrigation tank in their fields. “The driving philosophy behind this programme is the realisation that big dams are not the solution to the problems of irrigation but local initiatives like these which have far reaching impacts without destabilising the ecology of the area,” says Umakant Umarao. The mission is planning to increase the spread of the programme across the state.