Nag village, in Gangolihat block of Pithoragarh district quenched its thirst by capturing the rain water that is plentiful, but only during the monsoons. While the state is struggling to source water from drying rivers and ground water, the citizens of  Upper Naag (Malla Naag), found themselves better off by capturing the rain that falls on their village area.

Drinking water availability has been steadily worsening in the entire state of Uttarakhand over the past two decades, with the state facing drinking water crisis almost every summer. There has been a drastic reduction in rainfall in the last decade, with reductions touching almost 50% .

Even as rainfall is declining, deforestation, together with developmental activities have resulted in the drying up of rivers and springs, the traditional sources of water. Veteran journalist, B D Kasniyal says in an article that discharge has gone down by 50 % over the past 10 years, in as much as 38 per cent of traditional water sources in the state.  In recent years, the state has been  hit by an acute water crisis even at the beginning of the summer season, and water had to be supplied through tankers in the cities and towns. 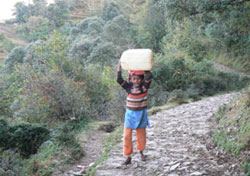 Nag is a remote village at a height of more than 2000 metres above sea level in Gangolihat block of Pithoragarh district. It has two habitations, Upper Naag (Malla Naag) and Lower Naag (Talla Naag). The source of water for the village used to be a non-perennial stream and a shallow dug well. Over the past two decades, these two sources have dried up, forcing the people to trek more than 5 km daily to bring water for all their needs – drinking, cooking, washing and for the animals. Women and children spent nearly 5-6 hours everyday on fetching water.  Water was brought for only the most essential purposes, which includes water for livestock.

The villagers approached the local NGO, Himalayan Gramin Vikas Samiti (HGVS) to help them find a solution to this problem. After looking at conventional solutions such as lifting water from the stream and constructing household storage tanks, which were not practical and far too expensive, they hit upon the idea of storing rainwater during the rainy season in a storage tank for use in scarcity period. However, even this was very expensive for the villagers who are too poor to contribute any cash. The second problem was the availability of land, and Harish Tamta, one of the few with sufficient land agreed to the use of his land for sitting of the tank.

The people approached the District Magistrate of Pithoragarh, Amit Negi, and explained their plight. He was very supportive and immediately sanctioned five lakh rupees from the Special Component Plan. HGVS chipped in with Rs. 4.25 lakh while the villagers contributed through labor. The village community of 20 families said that they needed a basic minimum of 200 litres/day/family in the scarcity period of about 100 days in summer. It was planned that a tank of 4 lakh litre would be built to hold the rainwater that flowed down the dhara in the rainy season. Additionally, the tank was designed in such a way that it could tap the rain water from its roof.

The water flows into the 60x40x8 ft tank after being filtered through a separate filtration unit. Then it flows down to a smaller tank of 4000 litres for distributing water on a daily basis. Water is then distributed through pipes to 7 stand posts at different spots in the village.

To manage the water distribution, the village formed a Village Water Committee in 2007 which is responsible for cleaning and maintenance of the structures. Each household contributes Rs.10 monthly for this purpose. However, they were unable to do so. “Most of the villagers are laborers and do not have not ample money to contribute to the maintenance of fund, only 7-8 families of out 20 have contribute regularly” , says Suresh Ram, the Head of the Water Committee. The entire village shares the responsibility of clean the catchments areas. After three years, the Committee was able to collected only Rs. 3570/-.

After installation of the tank, the community has started growing vegetables and is also able to irrigate some part of their agricultural land.  This has also provided much rest and relief to the women and they have also begun working on sanitation issues in the village.

Very close to Naag, the village of Rai-Garsiyari is facing similar water crisis. The 70 households are reeling under critical water crisis as they do not have any source of water. The women have to travel more than 2 kilometer at a stretch to fetch one pot of drinking water. They approached the same NGO for building a rainwater harvesting tank, however due to scarcity of resources the project has not taken off. More than 20 villages around Naag are living with similar water crisis in the absence of a sustainable drinking water system.

Upper Naag has become a successful case study of sorts and has attracted various key officials from the state like DMs, BDOs, SDMs and the Uttrakhand Jal Nigam. The HGVS urged them to come forward and follow the model in their districts to reduce the water crisis of the state. However due to lack of resources and interest this has not been taken up, said R.S. Bisht