Dating back 200 years, tribes in northeast India have used bamboo drip irrigation as a means of bringing water to seasonal crops. This timeless and traditional technology uses locally available material while harnessing the forces of gravity. An assortment of holed bamboo shoots zig-zag downhill, diverting the natural flow of streams and springs across terraced cropland.  The advantages of using bamboo are two-fold: it prevents leakage, increasing crop yield with less water, and makes use of natural, local, and inexpensive material.

The Jaintia, Khasi, and Garo hills of Meghalaya are largely made up of steep slopes and generally rocky terrain where the soil has low water retention capacity and where the use of groundwater channels is impossible. During the dry seasons, rainfed crops such as paddy, betal leaf, and black peppers can be irrigated by bamboo drip irrigation.

Within the Jainta hills, the small village of Nongbah relies on terrace agriculture for paddy cultivation. There are no restrictions for individuals tapping into water flows from perennial streams, natural springs, or collection ponds. This enables farmers, nearly 97% of the population, to cultivate paddy, betal leaf, and black peppers in seasonal rotations. Meanwhile, drinking needs are met by perennial springs during the dry months, from October to March. Only during the winter is irrigation required, and the bamboo system is used for crops that need relatively less water.

The few materials needed are a small dao (a type of local axe), bamboo strands of various sizes, forked branches, smaller bamboo shoots used for the channel diversions, and two willing laborers. A. Singh, in his book Bamboo Drip Irrigation Systems, investigated its use in Meghalaya and says that two workers can construct a system covering one hectare of land in 15 days. About four or five stages of irrigation zig-zag from the water source to the last point of application. Along the way, 18-20 liters of water will eventually disseminate at a rate of 20-80 drops per minute.

To get started, locate an available water source. Next, select a sloped area of land (at least 30 meters in variation). Then slice the bamboo shoots and forked branches, placing the wider shoots in the first channel and the smaller pipes for the last section (plan for 5 stages). Puncture a series of holes in the shoots, spacing them equally. Ground clearance should progressively descend so that the water may be dropped near the roots of plants in the last section (10-15 cm above ground). To reinforce the structure, tie the pipes and forked braches together using fiber-rich twine as rope. At points of diversion, smaller bamboo shoots may be used to redirect water. 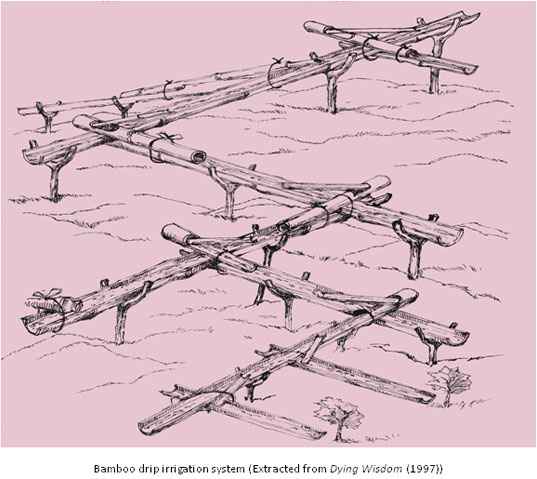 Materials used during installation last around three years, while maintenance is limited to cleaning and reinforcement after seasonal monsoons.  Cost is also limited to labor, which can be carried out by farmers themselves.  This traditional water structure is indeed contextual to location. Such variables include: replenishable supplies of bamboo, upland sources of water, and the presence of traditional terrace agriculture.

Adapting to drier growing seasons, farmers are advised to match irrigation decisions with crop selection. Professor Ramanthan of Tamil Nadu Agriculture University suggests that “during the June to September season … stop cultivation of rice and opt for crops such as pulses, sunflower, sesame and maize. In areas affected severely by drought, [farmers] should go for pearl millet, minor millet and forage crops. However, in places where there is water stagnation, they can continue to grow rice."

In the Meghalaya hills there are an estimated 3,108 square kilometers of bamboo forests. In 1990, it was estimated that the total yield of bamboo in the state was 2.09 tons/hectare/year. The 38 different species of bamboo in the region are typically harvested at the community level and loosely managed by the Autonomous District Councils (ADC). Bamboo supplies have recently come under threat from a surge in rodent populations, gregarious flowering, disease, and large-scale extraction.  Nonetheless, large-scale conservation and protection plans are underway in Arunachal Pradesh, Assam, Manipur, Meghalaya, Nagaland, Mizoram, Tripura, and Sikkim, which together contain over 50% of India’s bamboo supply (within 226,000 square kilometers of land.)

The Jaintia, Khasi, and Garo hill tribes have long entrusted the use of bamboo drip irrigation as a means to fulfilling domestic, agricultural, and customary needs.  Its function remains unspoiled so as the rains continue to fall and the bamboo continues to grow.