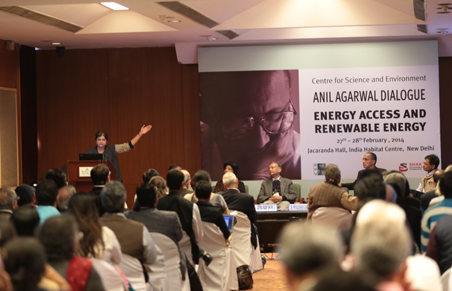 Anil Agarwal Dialogue brings together different stakeholders to discuss issues of national importance. The previous editions of the dialogue have discussed mining, forest clearances and water management. These discussions have been instrumental in pushing for reforms in the respective sectors. This year, the Anil Agarwal Dialogue will address the issue of energy access and the role of renewable energy in providing energy to all.

Energy access in rural India has been a development priority for the government for many decades. However, 45 per cent of rural households lack access to electricity. Around 700 million people depend on biomass for their energy needs, predominantly for cooking, and 77.5 million households still use kerosene for lighting. Although electricity generation has grown at 7 per cent between 2002 and 2013, we are still not able to provide electricity to everyone in the country. We at CSE strongly believe that India needs to end the energy poverty in the country and renewable energy will play an important role in it.

We take this opportunity to release the Citizen’s Report on Renewable Energy which provides insight on the current status of sector in India in addition to the some of the key stories that played a significant role in shaping the industry to what it is today. Our study on mini-grids, that establishes the need for a policy and regulatory framework will also be released during the dialogues. The two-day conference is focused on deliberating energy access issues, including electricity for lighting and clean sources of energy for cooking, and the role of renewable energy to meet the overall unmet energy demand.

Ajay Shankar
National Manufacturing Competitiveness Council
Ajay Shankar is the Member Secretary, National Manufacturing Competitiveness Council. He retired as Secretary, Department of Industrial Policy & Promotion in the Commerce and Industry Ministry in December, 2009. As the Joint Secretary/Additional Secretary in the Ministry of Power, he was one of the authors of the Electricity Act, 2003. He also conceived the Rajiv Gandhi Gramin Vidyutikaran Yojana for rural electrification.

Anshuman Lath
Gram Oorja
Anshuman Lath is the co-founder and Director of Gram Oorja Solutions Private Limited. Gram Oorja has been working in decentralised renewable energy systems since 2008. It focuses on community-based applications including micro-grids for electricity and cooking. He earlier worked as a consultant for the small-scale sector and in rural development projects.

Anumita Roychowdhury
Centre for Science and Environment
Anumita Roychowdhury is in charge of research and advocacy programme on sustainable cities and urban mobility at Centre for Science and Environment. Over the past two decades, she has worked extensively to build up the Centre’s policy advocacy programme on clean air, public health security and sustainable mobility.

Ashwin Gambhir
Prayas Energy Group
Ashwin Gambhir is a Senior Research Associate at Prayas Energy Group and has been working on renewable energy policy and regulatory issues and on Indian climate policy, especially with regard to mitigation. He also has a keen interest in rural energy use, energy externalities, depletion of fossil energy reserves and the social and environmental sustainability of energy systems.

Atma Ram Shukla
Biogas Forum of India
Atma Ram Shukla superannuated as Advisor (Bio-energy) in the Ministry of New and Renewable Energy in September, 2011 after working for the ministry for about 29 years. He has about 42 years of experience in policy; planning; developing national level Renewable Energy R&D and technology demonstration projects and dissemination programmes and their implementation.

Deepak Gupta
National Solar Energy Federation of India
Deepak Gupta is the Director General of the National Solar Energy Federation of India. He retired as Secretary, Ministry of New & Renewable Energy. He was associated with Ministry of Health & Family Welfare from 1998 to 2008 and spent a year with the World Health Organization in Delhi as Adviser in 2004.

Farooq Abdullah
Ministry of New and Renewable Energy
Farooq Abdullah is the Union Cabinet Minister, New and Renewable Energy. An M.B.B.S by qualification, he has been associated with public service since he was first elected to the Lok Sabha in 1982. He has been part of Jammu & Kashmir Legislative Assembly for five terms and two terms each in the Lok Sabha and the Rajya Sabha.

Gireesh B Pradhan
Central Regulatory Electricity Commission
Gireesh Pradhan is the Chairman of Central Electricity Regulatory Commission. He has worked at the Ministries of Food and Civil Supplies, Home Affairs and Power. He took over charge of the Ministry of New and Renewable Energy in October 2011 and was actively involved in development of the Jawaharlal Nehru National Solar Mission (JNNSM).

Jasmeet Khurana
Bridge to India
Jasmeet Khurana heads the Market Intelligence team at Bridge to India. He is responsible for the research, publication and consulting projects undertaken by the company. Prior to joining Bridge to India, he was Managing Director, Headway Solar, a solar consulting firm. An engineer by background, Khurana did his certification in photovoltaics from Stanford University.

Jyoti Dar
Kuvam Energy
As the founder director of Kuvam Energy Pvt. Ltd, Jyoti Dar has spent the past five years to reduce India’s dependence on coal and fossil fuels through use of solar PV energy. She has worked in business management and banking, with clients including the US Government and leading multinational companies.

Kanchan Kumar Agrawal
Centre for Science and Environment
Kanchan Agrawal is Programme Officer, Renewable Energy Programme at Centre for Science and Environment (CSE). He has been with CSE for more than three years working on issues concerning renewable energy sector, particularly wind power. Prior to joining CSE, he had a brief stint with Hindalco Industries, Aditya Birla Group.

Mouhsine Serrar
Prakti Design Lab
Mouhsine Serrar founded Prakti Design Lab in Puducherry, India. The company has provided clean-burning, fuel-efficient cookstoves to around 250,000 people in India, Nepal, and Haiti . Prior to that, he worked in product design as a senior mechanical engineer and consultant for companies including Motorola, Pitney Bowes, Intel, Boeing, and others for more than 10 years.

Nayan Goswami
Centre for Science and Environment
Nayan Goswami is the Programme Director for Renewable Energy in Centre for Science and Environment (CSE). He has over 17 years of experience in the areas of renewable energy and energy efficiency, working in variou organisations like International Copper Association, Reliance Energy, ABB Limited, GE Power Controls and Siemens.

Nikolaus Supersberger
GiZ
Nikolaus Supersberger is Deputy Director, Indo-German Energy Programme with GiZ. Having began his career at the German think-tank Wuppertal Institute for Climate, Environment, Energy, he worked in energy system analysis and energy scenario modelling, concentrating on the integration of renewable energies and energy efficiency into traditional supply and demand structures.

Praveen Saxena
Ministry of New and Renewable Energy
Praveen Saxena is Advisor in the Ministry of New and Renewable Energy where he is in-charge of Small Hydro Power Programme. He joined the ministry in 1983 and was responsible for various renewable energy programmes such as Solar Photovoltaics, Wind Energy, Rural energy programmes and policy planning of renewable energy. Saxena has over 40 research publications in International and National Journals.

Raghunath Mahapatra
Welspun Energy
Raghunath Mahapatra is the head of strategy at Welspun Energy. Over the past 23 years, he has worked in industry and in consulting organisations. He is an electrical engineer by training and MBA in finance and strategy from XLRI, Jamshedpur and ENPC School of International Management in France, where he was a French Government schola

Ranjit Bharvirkar
Regulatory Assistance Project
Ranjit Bharvirkar is an independent expert working as an advisor with the Regulatory Assistance Project since 2013. He has conducted research and policy analysis since 1997 and has provided technical assistance to policymakers and stakeholders in both India and the US. He also worked for six years at Lawrence Berkeley National Laboratory (LBNL) in Berkeley CA.

Satish Balram Agnihotri
Ministry of New and Renewable Energy
Satish Agnihotri is the Secretary in Ministry of New and Renewable Energy. As Director General (Acquisition) in the Ministry of Defence of the Government of India, he managed the entire capital acquisition programmes and addressed a wide range of policy, commercial and operational issues. He also worked with UNICEF, Kolkata as Consultant on Child Nutrition and Health.

Saurabh Kumar
Energy Efficiency Services Limited (EESL)
Saurabh Kumar was appointed Managing Director, EESL by the Ministry of Power in May 2013. He has worked in various capacities in Income Tax Department, Ministry of Power and Bureau of Energy Efficiency (BEE). He proceded on a UN Deputation to Bangkok for the last 2 years and was handling environmental issues in Asia – Pacific region. Anil Agarwal Dialogue: Energy Access and Renewable Energy

Shirish Sinha
Swiss Agency for Development and Cooperation
Shirish Sinha works with the Swiss Agency for Development and Cooperation (SDC) on their India programme as Senior Thematic Advisor – Climate Change. He has over 19 years of experience in rural energy, climate resilient development and energy/climate policy. In 2012, he was awarded Ph D in Public Policy from the University of Twente, the Netherlands for his dissertation ‘In Pursuit of a Light Bulb and a Smokeless Kitchen'.

Sumant Sinha
Renew Power
Sumant Sinha is the Founder, Chairman and CEO of ReNew Power Ventures Pvt. Ltd. He is also currently the Chairman of the National Renewable Energy Committee of Confederation of Indian Industry. Prior to this venture, he was worked with Suzlon Energy, and the Aditya Birla Group.

Tarun Kapoor
Ministry of New and Renewable Energy
Tarun Kapoor is the Joint Secretary in Ministry of New and Renewable Energy and is responsible for policy and programmes for promotion of renewable energy in the country. He has been involved in development of India’s largest hydropower house, headed a power transmission company and worked as head of Department of Energy at state level.

T L Sankar
Administrative Staff College of India
T L Sankar served as Principal, Administrative Staff College of India (ASCI), Hyderabad for over seven years and continues to be Honorary Visiting Professor (Energy Policy) in ASCI. He has worked in Planning Commission as India’s first Energy Advisor and headed many committees. He is now involved in the Studies on Energy Security for India and for the South Asia Region

Usha Ramachandra
Administrative Staff College of India
Usha Ramachandra, Professor and Area Chairperson of Energy Area, ASCI, is Doctorate in Economics from Central University, Hyderabad. She joined the faculty in 1998 and got involved in several of ASCI’s training programmes and consulting assignments in the power sector. She provides inputs on regulation, restructuring and reforming power sector for ASCI’s other programmes.

For queries related to this conference and participation please contact:

Decentralised renewable energy is the solution to India's energy poverty

Anil Agarwal Dialogue 2015: Poor in climate change: How the co-benefit agenda of short-lived climate pollutants can work for or against people and the Planet 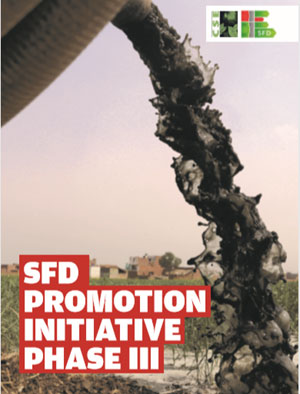