Brief on the Yamuna: WHAT AILS THE YAMUNA?

A layer of froth has been seen floating over parts of the Yamuna river in Delhi. Images of devotees thronging the river for the Chhath festival, standing in froth-laden waters, has once again brought the issue of the polluted river back in the glare. All the numerous river-cleaning plans and the money spent on them notwithstanding, the Yamuna continues to run dirty. Why?

What really is the condition of the Yamuna in Delhi?

The Yamuna river, the largest tributary of the Ganga, travels a distance of 22 km through Delhi. This stretch is the most polluted stretch of the river in its long journey. The river’s stretch in Delhi is barely 2 per cent of the length of the total river basin, but it contributes over 80 per cent of the total pollution load in the entire river.

This pollution load is added to the river due to urban and industrial pressures. All the pollution parameters show that the river is dead in its Delhi stretch – the dissolved oxygen (DO), which tells you if the river has life, is zero when the river passes through Delhi. Delhi takes the river’s water and returns only sewage into it: the barrage at Wazirabad (where the river enters the city) takes water for drinking, and after this the river receives waste discharged from 22 drains.

What causes the frothing in the river?

The frothing is a sign of a polluted river. Release of untreated or poorly treated effluents – household and industrial wastewater – is the reason behind the frothing. Specifically, phosphates in the river form the froth: these phosphates come from detergent effluents from households and industries. At this time of the year, Yamuna has less water flow. As a result, pollutants do not get diluted.

What has been done till now to clean the river?

As per latest (2018) available estimates, Delhi has already spent over Rs 1,500 crore for cleaning the river; this does not take into account the cost of the common effluent treatment plants that have been built in the city. This is possibly the highest amount spent on river cleaning in the country. But it has not worked, as is evident from the pollution data.

In 2005, the Rs 380-crore YAP (Yamuna Action Plan-II) was sanctioned for Delhi. About 50 per cent of this was to be used to rehabilitate 30.2 km of defunct sewers by 2008. In 2006-07, the Delhi Jal Board (DJB) introduced its interceptor plan to lay over 60 km of sewers along Najafgarh, supplementary and Shahdara drains. This massive hardware programme, however, has not proved effective in terms of controlling pollution. An analysis of the BOD (biological oxygen demand) indicates that nothing has changed in terms of pollution load in the river. The load has gone up from about 129 tonne per day in 1982-83 to over 261 tonne per day in 2019.

The Bureau of Indian Standards (BIS) has set down quality norms for soaps and detergents, and the Delhi Pollution Control Committee (DPCC) has now banned the sale of soaps and detergents that do not conform to those norms. But will these standards be enforced and the ban implemented? That is anybody’s guess.

Table: Money down the drain (cost of Yamuna clean-up by 2012)

Calculated by CSE on data received from the Yamuna Action Plan 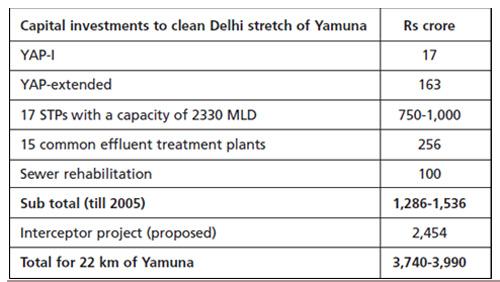 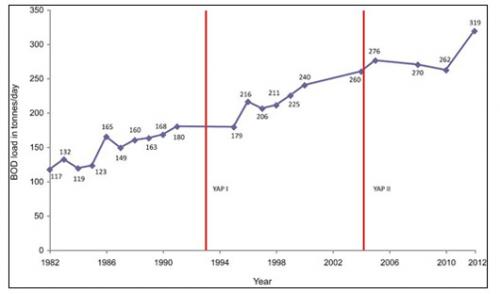 Source: Centre for Science and Environment, 2012. State of India’s Environment: Excreta Matters and Centre Pollution Control Board, 2013. Yamuna at a glance

What does CSE’s analysis of the problem say?

Delhi has already built 17 sewage treatment plants (STPs), which together add up to 40 per cent of the total installed sewage treatment capacity in India. But these plants remain grossly underutilised. The city does not have the drainage to convey all its excreta to the treatment plants. A majority of Delhi lives unconnected to underground drainage or lives in what we call unauthorised and illegal colonies. The sewage from these areas — untreated — flows into open drains crisscrossing the city. But these are the same drains, flowing past colonies, in which the STPs dispose of their treated effluent. In this pollution scheme, the illegal unconnected waste of the majority is being mixed with the treated waste of the minority. The result is obvious: growing pollution in the river. We can never clean the Yamuna until we can treat the sewage of all in the city. But this will require providing drainage to all, and sewage treatment for all.

For this, the economics of this waste matter is important to grasp. We have to first pay for the water we use and then for the waste that we generate. This is because the more water we use in our houses, the more waste we discharge. But it is not just the cost that we need to pay. The fact is that all governments (including that of Delhi) are designing systems that we cannot pay for. These are unaffordable systems to pipe water across long distances, which add to the cost of distribution and worse, increase water loss. Then, we design to take back the waste and pump it and pipe it even longer distances. Thus there is a need to relearn the science and art of river cleaning. Business as usual will not result in a clean river.

What would be a viable Action Plan for Delhi’s Yamuna?

We need to change the art of pollution control. We need to chalk down the strategy for business-unusual so that we can spend more money but get a living and breathing river in return.

Provide water in the river for dilution of waste: Rivers need water to assimilate the waste. Today, Delhi takes water from the Yamuna, upstream of Wazirabad, and returns only sewage to it. Between the two barrages — Wazirabad and Okhla — there is no water. There are only some 17 drains that bring sewage into the river. Even if we were to treat every drop of waste before it reaches the river, it will do nothing. The river must have water to dilute the waste. There are two ways for Delhi to get water in the river. One, it can demand Haryana gives it more water. But this will be difficult. The second option is that Delhi can begin to reduce its own water demand and build water harvesting for capturing rainwater for discharge in the lean season, so that it can allow water to flow in the river. This can be done.

Maximise the utilisation of the existing STPs: There should be ways for bringing waste to the plants, by lifting it from open drains, not just waiting to build new ones or building and repairing more drains. The sewage should be intercepted from the drains. The hardware approach needs to go. Treat all sewage by intercepting from open drains, not by building interceptors to existing drains and pumping waste to existing sewage treatment plants.

Treat but do not discharge into the drains: The treated effluent must not be put back into the same open drain, which carries the untreated waste of the majority. Today, we spend huge money in first pumping sewage long distances for treatment and then waste this effort by dumping the cleaned water in unclean drains. Today, sewage is treated at the Yamuna Vihar plant in east Delhi, and disposed off in the drain carrying untreated waste outside the plant. Then the same waste is treated further down in the Kondli treatment plant. Cleaned effluent is then dumped into a drain, which flows past the new colonies of Noida, which add more discharges. By the time it reaches the river, there is only sewage in the drain, no water.

Recycle and reuse the treated waste: All treated waste should be reused and recycled, as far as possible locally so that costs of pumping are reduced. In other words, sewage must be reused in gardens, in lakes or in industry. STPs must be built only when they have been planned for reuse.

Treat sewage directly in open drains: We must treat sewage directly in the open drains that crisscross the city. So, instead of waiting for every open ‘storm water’ drain to go underground and disappear, the system will ensure all waste is treated and cleaned as it flows through the city. Therefore, plan for in situ drain treatment, as it will bring down pollution levels of discharge that is not intercepted. The bottom-line: use the open drain for treatment of waste. This would mean using innovative technologies for bioremediation (‘green’ plants) and oxidation to decompose and degrade sewage.

Treat the remaining waste in drains near the river: We should build STPs close to the banks of the river to treat whatever waste remains in the drains. This would mean using technologies, which need less land to treat sewage. The design would be not to discharge anything but treated effluents in the Yamuna. The treated waste should be put into the river for dilution.

For reaching out to a CSE expert on Yamuna and its pollution problem, please contact Sukanya Nair of The CSE Media Resource Centre, sukanya.nair@cseindia.org, 8816818864.