Review of the interceptor plan for the Yamuna

The interceptor project is projected by the Delhi Jal Board (DJB) as a panacea to the pollution problems of the river Yamuna. An analysis of the detailed project report on this project shows that the project, as it is designed, will not result in a clean river. It will be more money down the drain.

It was in response to the criticism over the failure of the efforts to clean the Yamuna including the Union ministry of environment and forest (MoEF) sponsored Yamuna Action Plan (YAP) that the DJB came up with the idea of interceptor sewers. So far Delhi government has spent over Rs 1,500 crore just to connect 50 per cent of Delhi’s population to its sewerage network. Delhi has the largest sewerage infrastructure—6,000 kilometres (km) sewers and 2330 million litres per day (mld) sewage treatment capacity. CSE in its report Sewage Canal: How to clean the Yamuna pointed out that a paradigm shift is needed in our approach to clean the river. An approach moving away from the standard hardware—sewer and STP—approach. It called for a plan understanding the linkages between water, sewage and pollution and most importantly the need for authentic data. (See presentation on Yamuna)

The interceptor sewer project is yet another hardware project which if implemented will be costlier than all the projects executed till date for cleaning the 22-kilometer (km) stretch of the river. The plan is to tap minor drains discharging sewage into three of Delhi’s largest drains at the cost of Rs 2454 crore. Laying of interceptor sewers is just one part of the whole project. There are other components including augmentation of existing capacity of STPs at mouth of Delhi gate and Sen Nursing Home drains, rehabilitation of two major trunk sewers to intercept 13 drains out falling into the Yamuna and most importantly construction of new sewage treatment plants (STPs) after achieving full utilization of existing ones. These are parallel and mandatory efforts required to make interceptors work.

DJB in all its communications to the Supreme Court and the media has maintained that the project cost is Rs 2454 crore which includes expenditure to operate and maintain the interceptors for ten years. What is hidden from public is the fact that the total investment (at current rates) required for the interceptor sewerage project as a package will be any where about Rs 5,600 crore. This works out to almost Rs 250 crore per kilometer of the river flowing in the city. 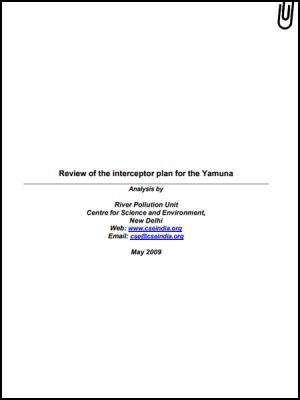