Art of gobbling up Yamuna floodplain

Without proper mapping and a plan for its acceptable use, no one can prevent the Yamuna floodplain from being gobbled up

It is time we focused on strengthening the capacity of regulatory agencies It is time we recognised that the current ways of fixing the environment are not working. Rivers are more contaminated; air is more polluted and cities are filling up with garbage we cannot handle. The question is: where are we going wrong? What do we need to do?

How to Clean the Yamuna

While the Delhi government has been debating on what needs to be done to clean the river, the pollution levels have only worsened. In its book Sewage Canal: How to Clean the Yamuna, published in 2007, the Centre for Science and Environment reported that the Delhi stretch of the river is not only dead but had an overload of coliform contamination. Two years later, the pollution data shows no respite to the river.

It was way back in 1986 that Rajiv Gandhi had launched the Ganga Action Plan. But years later, after much water (sewage) and money has flowed down the river, it is as bad as it could get. Why are we failing and what needs to be done differently to clean this and many other rivers?

On World Water Day, we release the report of the Second Anil Agarwal Dialogue: Excreta Does Matter. This two-day meeting attempted to join the dots between improper and inadequate sewage treatment and India's growing water crisis. It brought together about 500 people from NGOs, private sector, academia and the government to present and debate the challenges of urban sewage treatment and water supply. Please click here for the full report.

The Yamuna River continues to attract bad press for being a sewage canal.

Maha Kumbh in Allahabad has perhaps no parallel in terms of the sheer size of the congregation. In less than two months over 100 million people are expected to come to this city, which sees the confluence of two rivers of India—the Ganga and the Yamuna. People come to worship on the banks of the Ganga. Even as they celebrate the river it seems they don’t see the river, but only the ritual. 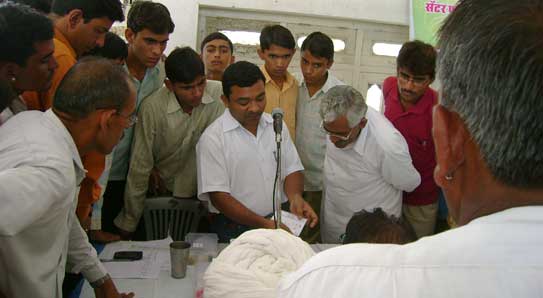 On October 1, 2008, Pali - a textile town in Rajasthan near Jodhpur - witnessed a unique jan sabha (public meeting) wherein the farmers, industry and the government sat together to discuss the solutions to deal with a long pending issue of pollution in the rivers Bandi and Luni.

Water is life and sewage tells its life story. This is the subject of the Citizens’ Seventh Report on the State of India’s Environment, Excreta Matters: How urban India is soaking up water, polluting rivers and drowning in its own excreta. It has a seemingly simple plot: it only asks where Indian cities get their water from and where does their waste go. But this is not just a question or answer about water, pollution and waste. It is about the way Indian cities (and perhaps other parts of the world that are similarly placed) will develop. 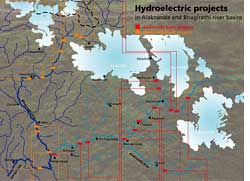 Ganga and the environmental flow

While going up the meandering road from Tehri to the holy town Gangotri during the thick of monsoon, the Bhagirathi appeared to get uneasily quieter with each hairpin bend; until Chinyali Sor village near Dharasu, 45 km from new Tehri town.

With growing urbanisation and industralisation India faces the challenge of providing clean and safe drinking water to all citizens. In the name of economic growth most rivers and streams are turning into sewers. As more and more rivers are getting polluted, the municipalities are finding it difficult to treat river water to safe levels and supply it to citizens. Policies and programmes for pollution control look at water use, waste generation and pollution in isolation and this piecemeal approach towards river cleaning based on creating expensive hardware for waste collection and treatment has not worked. The rivers run dirty despite huge investments.