What should be the Coliform standard in India's sewage treatment protocol in order to promote safe reuse of reclaimed water for domestic, industrial and agricultural use; are stringent standards affordable?

The discharge of untreated sewage and the ensuing bacterial contamination of surface water bodies pose a health risk in its reuse, be it for a variety of domestic purposes including safe drinking water, as well as exposing farmers who often use raw sewage or polluted streams to meet their irrigation needs. Not a single city in India has been able, in entirety, to deal with its sewage problem. The gap between sewage generated and the capacity to treat is on the rise, as urban planning and infrastructure is in a shambles.

Politicians continue to fight elections on the promise of providing infrastructure to provide electricity, improve urban mobility and supply safe drinking water. But not a single electorate demands that their ensuing sewage be treated (thumb rule: 80 per cent of water that enters a household leaves as sewage). Therefore often even mere promises are not made to collectively treat a city’s sewage, forget drawing up plans on how maximise reuse to curb freshwater demand in attempts to achieve water security. Many cities, downstream of major sewage outfalls have little choice but to use contaminated raw water, treat it as one would sewage, and finally issue a heavy dose of chemical disinfectants that have its own associated health risks.

Towns and cities mindlessly flush their sewage (partially or entirely untreated) over distances without giving much thought to the potential reuse of treated water for a variety of purposes in the urban landscape. Often in the peripheries of cities, or even further out in the rural landscape, this discharge is in fact treated as a resource, but one which carries a health burden. Many thousands of farmers in India use sewage as their primary source of irrigation, thereby putting their health and that of the consumer at risk. Urban India generates more than 40,000 million litres of sewage each day (MLD). And while much of this contributes to the pollution load of water bodies, an estimated 20,000 MLD is currently used for irrigation every day—more than half of it untreated (R C Trivedi, personal communications). 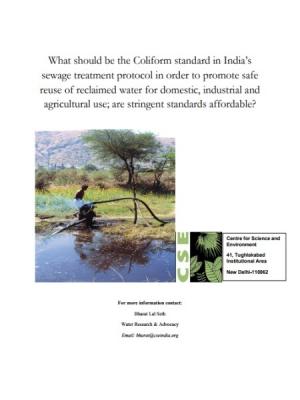