BRT - Missed the bus for cars 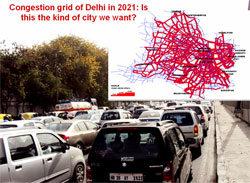 While reading the recent assessment of the bus rapid transit corridor by the Central Road Research Institute (CRRI) in Delhi I thought of Gurgaon. This happening town near Delhi is facing extinction. The Punjab and Haryana High Court has put a moratorium on further construction because its only source of water -- from the ground -- is running out. Its commercial institutions are shutting early to relieve energy stress this summer. It is clamouring for space to run and park its cars. This town cannot grow any more unless it reinvents. The rich will suffer the most. It has hit the fabled `limit to growth` simply because its planners did not have foresight.

The CRRI review suffers from the same malady. It lacks foresight. It is trying to make Delhi believe that exponential car growth can continue and there is no need to get realistic and find alternatives. This conclusion comes despite the chilling evidences of dizzying car growth on the corridor. It says this road can remain functional only if the spaces reserved for buses, cycles and walkers are taken back for cars. They believe cars can grow infinitely, forever, and cause no harm. Thus, there is no need to push for modern, affordable and attractive alternatives to cars on this corridor.

This evaluation concludes that the “no-BRT option yields better benefits given traffic situation….”. That the results of their experimental run shows that allowing other vehicles to ply on the bus lane – in other words, scrapping BRT -- “was better for vehicles …”

This performance evaluation of the corridor has no reference to its intended policy objective. Instead they have assessed if the BRT has slowed down traffic and increased fuel consumption of cars and two-wheelers, and understand “functional efficiency of the traffic movement”. This is a clear subversion of the National Urban Transport Policy that has so categorically stated ‘plan for moving people, not vehicles’.

People, naturally enough, tend to ignore the dangerous consequences of the current growth model. They are more concerned about the immediate. Therefore, those who drive cars on the BRT are terribly upset about the road space crunch. They feel they and their cars have not been accommodated in the design meant to promote bus, walking and cycling. They blame this for their increased journey time, idling, fuel loss and inconvenience.

This local concern could have been addressed very legitimately and efficiently. The traffic problems faced by the car users could have been resolved by the local relief measures already suggested by official technical bodies. Along with this, the rest of the corridor could have been completed to dramatically improve reliability, efficiency, frequency and the overall attractive quotient of the bus to entice people – even rich people -- to use them and cut down the vehicular load. After all, 5.8 km is too short a journey distance to make people shift to a bus for daily commuting. The 14 corridors of 300 km length should have been in place.

But the focus is not on solving the problem but on killing the whole idea. As India’s parliamentary democracy turns 60 this year, car owners have pitched hard for equal treatment to all vehicles on roads, not equality of all persons on roads.

Let us face the harsh fate that awaits this city. The daily travel trips will explode from 15 million today to more than 25 million in 2020. The travel choice of Delhi’s teeming millions will decide the city’s liveability. If nothing more is done to radically improve affordable bus transport, walking and cycling, then Delhi by 2021 will gasp for breath, pay unacceptable fuel costs, suffer injury and deaths in road accidents and from pollution, and spew warming gases like never before. Are Delhiites opting for a future of illness and injury?

Congestion will only get worse by 2021 as car ridership will jump the maximum -- by 106 per cent. Bus ridership will be slowest to increase at 28 per cent. Delhi has already suffered a massive loss in the share of bus ridership from 60 per cent to 40 per cent. This is when 48 per cent of Delhi households do not yet own any personal vehicle, and cars meet only 14 per cent of the travel needs. The Master Plan target of 80 per cent public transport ridership by 2020 cannot be met without the bus and the BRT, says the RITES 2011 Transport Demand Forecast.

Despite the limitations, the CRRI report proves that the corridor has helped to increase the people-carrying capacity of the road. Though buses are 3 per cent of the vehicles, they carry close to half of the commuters with improved speed. More importantly, bus ridership has increased by nearly 7 per cent since its inception.

Notably, the BRT design has been found to be far more efficient in moving much higher traffic and passenger volume than non-BRT roads. For example, the BRT corridor carries a staggering load of more than 1.7 lakh vehicles a day as opposed to about 73,000 on the non-BRT Aurobindo Marg nearby. The peak volume on the BRT road is twice that of a non-BRT road. Yet the peak hour car speed on both for most parts is comparable and little higher for non-BRT road. But bus and cycle numbers, their speed and their passenger volumes are much higher on the BRT corridor. Bus passengers on the corridor number 2.5 times more than that on Aurobindo Marg. Isn’t that what we want?

For the CRRI, relatively higher bus speed on the BRT corridor is of no consequence, but lower car speed is unacceptable. Look at other non-BRT corridors that are coming to a grinding halt in the city. The ongoing urban emissions.info study on car running speed on other roads of South Delhi, Noida, Gurgaon and Dwarka have found that cars crawl at 4 kmph for almost 24 minutes in two hours of driving. Running to a standstill?

More cars and more road space for them will only reduce the people-carrying capacity on all roads. Two cars occupy same space as one bus, but carry 20 times less people. In some prominent Delhi roads, cars are more than half to close to 70 per cent of the total traffic -- but can carry only quarter or less of the travel trips. Reclaiming space from bus, walkers and cycles will not help the city.

The shocking elitist bias defends people in cars waiting in queues claiming they have higher value of time than those in buses. The stark irony hits harder in their observation that “bus delays happen maximum in the evening due to larger number of social and leisure commute made by private vehicles bound towards the malls, shopping complex, movie halls…” Is that what is meant to shape the mobility policy of the city? An important finding from their own survey that gets buried is that buses carry the maximum number of educational trips – our children, students. There is no accounting of their time. This tale gets more sordid when we find that bus users have not been included in their opinion surveys.  Ironically, close to a quarter of the car user have rated the system as good.

This has happened because the study has not considered the environmental costs of cars. While accounting for the fuel losses for the rich car owners idling in the traffic intersections to keep their ACs on, the report indulges in chest-thumping about extra fuel burnt due to long queues. Not once has it mentioned how -- on a per passenger basis – a car user is guzzling unacceptably high amount of fuels compared to a bus passenger. And that this guzzling cannot continue.

Even more deadly is the finding that cars and SUVs are burning more diesel than petrol or CNG on this corridor. The schools and the neighbours along the BRT corridor must be terribly worried about proximity to diesel guzzling given the recent branding of diesel emissions as class I cancer-causing substances by the WHO.

Our concern is more fundamental. At one level, it gives us the confidence that the Delhi government has understood the value of scaling up alternatives to cars. It recognizes buses are the best option as the most affordable and flexible mode. But for buses to become attractive even for the rich, they must look good, be comfortable, reliable, and have speed. This is possible only with dedicated space. But unfortunately, this understanding has not percolated. People are stopping the government from implementing its own policy, contradicting the sustainability principles coded in the National Urban Transport Policy, National Habitat Missions Standards, National Climate Action Plan, and the relevant policies of the Delhi government.

This jeopardizes the ultimate fate of BRT projects sanctioned under the Jawaharlal Nehru National Urban Renewal Mission of the Ministry of Urban Development – and not only in Delhi. This uncertainty is slowly corroding policy decisions on other corridors across the country. One wrong step in Delhi can misinform the public and policy makers about its intended benefits for public good. The anger and arrogance of cars may wipe out the fragile protection for common good as the politics of minority may ignore the interests of the majority.

With transportation tied to climate change, air pollution, traffic fatalities, liveability of cities, and congestion, sustainable transport is now a legitimate part of the development discussions both at local and global levels. This was strongly evident in the recently concluded Rio+20 negotiations which put sustainable transportation on the definitive agenda – pitching for increasing walking, cycling to doubling the share of public transportation worldwide within a decade. Bus transport is core to this paradigm. Our decision on the 5.8 km stretch will reflect on India’s stand on the principle of equity in the global climate forum.

This debate is not just about BRT. Delhi is increasingly finding it hard to push policies aimed at improving alternatives to cars to meet its environmental and social goals. It has persistently given a resounding NO as answer to parking rates hike, tax hike on cars and fuels, and giving space to buses. Even bus purchase has slowed in Delhi as the city cannot find the space to park them. It is naïve to believe that the affluent will voluntarily change the way they travel. If we do not act decisively it will further undermine the negotiating power of the regulator to push for sustainable practices.

Deal with the local concerns of the road users on the BRT stretch. But let the government implement its own policy that upholds the people-centric approach; protects and promotes modes that cause least harm, cut pollution, protect public health and are sustainable, affordable and equitous.

Can there be any argument against this?