In a rare coming together to mark 25 years of Down To Earth magazine, Manganiar folk musicians from western Rajasthan chime in with India’s top monsoon scientist and Sunita Narain to talk about rains 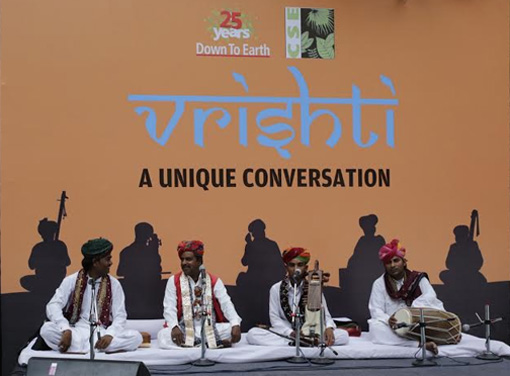 New Delhi, September 20, 2016: “Monsoon is perhaps the only time when the entire country is in desperation. It cannot exhale till it rains,” says Sunita Narain, director general, Centre for Science and Environment (CSE), as she begins talking about a unique initiative by CSE which was kicked off here today. Titled ‘Vrishti’ – one of the many Hindi names for rains – this was designed as a unique conversation between scientists, musicians and the civil society with one aim: to unravel the mystery behind one of India’s most intimate yet least understood climate phenomena – the monsoons.

Monsoons – especially the erratic kind -- and changing rainfall patterns are probably some of the most visible fallouts of climate change that have a direct and profound effect on our lives. Says Narain: “The monsoon is our real finance minister. The economic fate of the nation depends on it. In this day and age of climate change, it is becoming increasing difficult to predict and understand this powerful phenomenon. Through this initiative, we are trying to explore the various aspects of monsoons, rediscover its magic as well as its mystery.”

“Down To Earth, which is celebrating 25 years of consistent reportage and analysis of environment and development issues, was the appropriate medium and platform for this kind of a discussion. Today’s evening will be devoted to a combination which has perhaps never been tried or witnessed before – a discussion on the science of monsoons with one of India’s leading climate scientists, and a recital of folk music by a community of musicians known for its renditions on rain,” adds Narain, who is also the editor of the fortnightly founded by her and CSE’s founder-director, the late Anil Agarwal.

‘Vrishti’ began with M Rajeevan, secretary, Union ministry of earth sciences, and Narain discussing the complex inter-linkages of the Indian monsoon with the faraway Pacific, the temperature of the Tibetan plateau, the Eurasian snow and even the freshwater content in the Bay of Bengal.

Habib Khan Langa, Jepu Khan Langa, Aslam Khan Langa and Sadiq Khan Langa from the Manganiar community of musicians regaled the audience with their folk paeans to nature and monsoons. The Manganiars are popular traditional musicians from western Rajasthan who sing praises of great Sufi saints as well as Hindu gods.

On this occasion, Rajeevan and Narain released CSE and Down To Earth’s latest e-book titled ‘An 8-million-year-old mysterious date with monsoons’. As India witnesses a devastating cycle of water stress and floods every year, the e-book tries to raise some pertinent questions – How much do we know about this phenomenon which is so important in every Indian’s life? Do we even know why it rains? Do we know that scientists are still squabbling over the definition of monsoons?

Says Narain: “This lack of knowledge of nature’s ways is probably at the core of the environmental crisis. The more we understand the monsoons, the more we can learn about how to develop sustainably. The need of the hour is to try to deepen our knowledge of and thereby, our engagement with monsoons.”

CSE also unveiled a photo exhibition here today on ‘Apatanis:The Monsoon People'. The Apatanis represent a tribal group of approximately 60,000 in the Apatani plateau in Arunachal Pradesh. Known for their highly efficient agricultural practices, the Apatanis have maintained their traditions by oral recounting of their legendary and mythical beginnings.

INVITATION: Celebrating 25 years of Down To Earth magazine

An 8-million-year-old mysterious date with monsoon