Suggests subsidies for developers to support the transition

June 29, 2018, New Delhi:  CSE, an environmental research and advocacy organization, held a round-table meeting to discuss the role of mini-grid electricity generators in addressing the energy access challenge in rural Uttar Pradesh.  According to a CSE report titled ‘Mini-grids in Uttar Pradesh – Policy Lessons’, one-fifth of the rural population of India continues to live without electricity access despite the massive growth in electricity infrastructure in recent years.

Currently, in rural Uttar Pradesh, 1.42 crore households are living without electricity connections. Despite government claims, power supply remains limited to 10-16 hours and 2 to 4 hours during peak demand hours when needed most. As the electricity crunch is likely to persist, there is a strong case for mini-grid development in the state over the next 5-10 years. These mini-grids will be fed from small renewable energy units – mostly solar or biomass based. However, at present, unregulated mini-grid sector development has led to consumers paying very high tariff rates – Rs. 20 – 150 per unit for 6-8 hours of power supply, says the report.

The state government’s attempt to regulate tariffs and improve the supply of mini-grids through its mini-grid policy (introduced in February 2016) has failed to achieve its objectives. According to the CSE report, not a single developer seems to have availed the state subsidy or is operating a project under its ambit. This is because it fails to address the developers’ concerns of project viability at low tariffs and commercial uncertainties.

In view of this, CSE recommended stringent service standards for mini-grid systems at a tariff similar to what is charged by DISCOMS in the rural areas. This should go hand-in-hand with subsidies for developers – for generation and distribution asset development.

There was consensus on the fact that mini-grids have an important role to play during the transitional phase. Tweaks in the existing policy mechanism and the business/revenue model can result in mini-grids providing adequate, reliable and affordable electricity to all. This will encompass setting minimum standards in terms of hours of electricity supply, reasonable tariffs for consumers and viable operational and commercial terms of agreement for developers. 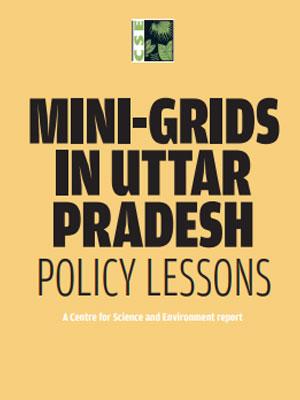