Despite being one of the most polluted cities in the country, Delhi has succeeded in arresting the runaway air pollution. Early action to control air pollution in nearly all sectors has helped in this turn around. Delhi has relocated polluting industries, and introduced Euro II and Euro III emisssions standards for vehicles. All its buses, three-wheelers and some of its taxis and cars run on CNG; 15-year old commercial vehicles have been taken off the roads; transit freight traffic is restricted and controls on power plants are tighter. There is also a legal ban on open burning of leaves. However, despite the cleaner air, Delhi is far away from the clean air goal. The air quality data still point towards the unhealthy levels presenting a serious public health challenge. Delhi, in fact, is on the verge of losing the gains of its first phase of action. Meeting clean air standards presents a very difficult challenge.

The air pollution challenge remains difficult in Delhi and many other Indian cities mainly because of the failure to address the explosive increase in vehicle numbers that threatens to undo the small incremental gains. Car numbers are exploding when more than half of our cities are reeling under pollution levels that are officially classified as critical. Direct exposure to traffic fumes is amongst the deadliest of the health threats.

The speed of this change is scary. It took as many as 30 years for India to reach the first million mark for personal vehicles in 1971. After that another 20 years to add two more million. Then in 10 years (1981-91) India added 14 million; another 10 years (1991-2001) 28 million. But in this decade just in four years (2001 to 2004) 16 million vehicles were added. Delhi today adds nearly 1100 vehicles a day. This means air quality will only get worse, energy use will go up, and cities will grind to a stop due to congestion. The cost of congestion in Indian cities is conservatively estimated at Rs 3000 to Rs 4000 crore annually. 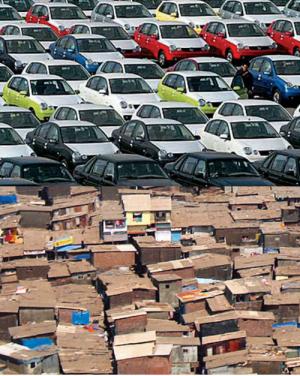