The initial 5.8 Km of the Bus Corridor in Delhi became operational on April 20th 2008. The facility stretches from Moolchand to Ambedkar Nagar along JBT Marg in South Delhi. The corridor infrastructure consist of single median lanes for buses with physical segregation and double platform bus stops located close to the intersections; two lanes for general traffic; and bikeways and sidewalks on the two sides. The general traffic lanes flare at the intersection to provide an additional lane for turning movements. Bus operations include 57 different routes operated by Delhi Transport Corporation – DTC (a public company owned by the Delhi Government), and private operators (Blue Line Buses) under permit by the Secretary of Transport STC. Company and school buses are required to use the bus lanes. The corridor can be described as an open system, i.e. bus routes enter and leave the corridor along its way. Operations do not have centralized control. 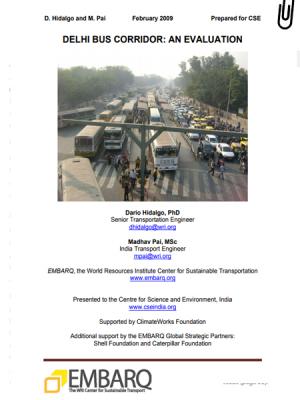