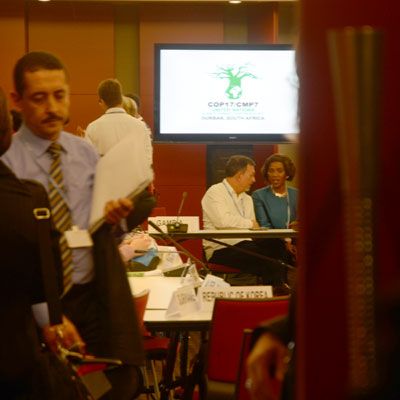 New draft of Indaba text available. Shows hardening of stand of EU -- text now proposes only one date of 2015, by when the new protocol or another legal instrument applicable to all parties should have to be adopted.

Clearly, there seems to be no sign of a resolution to this COP.

Now Indaba is meeting again, plenary will meet soon (no specific time given).

The meeting may well extend into Sunday at this rate.

Thank you Madam Chair. I do not know how to start. I have heard people across the room carefully. I am from India and I represent 1.2 billion people. My country has a tiny per capita carbon footprint of 1.7 ton and our per capita GDP is even lower.

I was astonished and disturbed by the comments of my colleague from Canada who was pointing at us as to why we are against the roadmap. I am disturbed to find that a legally binding protocol to the Convention, negotiated just 14 years ago is now being junked in a cavalier manner. Countries which had signed and ratified it are walking away without even a polite goodbye. And yet, pointing at others.

I was also deeply moved listening to the comments of my colleagues and friends from the small island states. Our positions may be different, but their sentiments resonate with me very strongly. India has 600 islands which may be submerged, we have deltaic region in which millions of people live. We are absolutely at the forefront of the vulnerability of Climate Change. When I talk here, I have in front of my eyes, the face of the last Indian who is affected by the effects of Climate Change.

It would be helpful if we do not talk at each other and do not prejudge each other.

As a developing country, the principles of equity and CBDR are central for us. India is asking for space for basic development for its people and poverty eradication. Is this an unreasonable demand? Former Prime Minister of India Indira Gandhi said that poverty is the greatest polluter and development is the greatest healer. Equity has to be the centerpiece of the Climate discussion and our negotiations should be built on it. We cannot accept the principle of CBDR to be diluted. The firewall of CBDR must not be broken. Equity in the debate must be secured.

I too raise my voice for urgency. Climate Change is the most pressing and urgent problem for us. I too have a grandson, the son of my son. Climate Change affects us too. What is important is what action we are taking to address it. We are not saying nothing should be done now, or no action should be taken. On the contrary. We are asking that the actions of the developed country parties must be reviewed.

We have taken ambitious steps in India to address Climate Change. My Prime Minister has announced that our per capita emissions would never exceed that of developed countries. Has any other country done this? We have ambitious energy efficiency targets. We have pledged to lower our emissions intensity of our GDP by 20-25% by 2020. A recent report from Stockholm Institute has noted that the mitigation pledges of developing countries amount to more mitigation than that of developed countries.

Coming to the text you have presented Madan Chair, I have three comments.

First of all, there is an imbalance in the two texts. The KP is weak. It does not have:

The numbers for KP parties, not till next years

No timeline for ratification

We should have clear timelines that advance the actions and ambition of parties. We in the developing world are taking very ambitious domestic actions. It is because we need urgent actions that we should urgently implementation the Bali Action Plan and operationalize the Cancun Agreements.

We should have an ambitious implementation phase till 2013 and then go to the Review in 2013-15 to make an assessment based on science and commitments.

We should then begin work on the arrangements that can enhance our ambition further. We should not confuse legally binding arrangements with ambition. We need commitments, not mere hollow promises.

The 3 agenda items of India included in process, moved to next year for discussion. The 3 agenda items - equitable access to sustainable development, unilateral trade measures and intellectual property right for technology - has not been included in the final agenda adopted by CoP at Durban. Instead the CoP has decided to hold workshops on all these agenda items next year and discuss the outcome of the workshops in CoP18 at Qatar. No date or place has been fixed for these workshops.

Indaba meets again but moves to a bigger room. Not clear if the atmosphere in that room is good for a speedy negotiation or demise.

US press conference, scheduled for 2.30, has been rescheduled until further notice..Clearly the pressure is building up. Countries want to hedge their bets on what the outcome will be.

South African President in her report on the progress made said countries are still discussing how the process will begin and its timeline. "We need to leave with convergence on future process. This is where we are. Parties want green party fund to be launched now, but we also need long term finance so that we do not launch an empty shell.

"All groups, including BASIC are discussing the future process, what we are discussing now is the how". How we launch the future, what steps we need to take between now to 2015 and then between 2015-2020.

India says BASIC is united in agreement for a new protocol (or outcome) post-2020. Rebuts EU stand that BASIC is divided. Jayanthi Natarajan, India's environment minister, said: "Even today BASIC are all on the same stand. Our demand has been extremely reasonable and we want to wait for result of 5th review of Intergovernmental Panel on Intergovernmental Panel on Climate Change. I have a feeling that earlier they wanted to bury Bali Action Plan but now I think they want to bury Cancun agreement also. We want answer to our questions before we agree to anything."

“We have got half the BASIC, we are waiting for the other half,” said Connie Hedegaard, EU Climate Commissioner at her press conference. She claimed that the world was closer to the deal.

The BASIC countries had been divided; Brazil and South Africa were now with the EU in agreeing to fast track negotiations for the legal agreement by 2015. India and China, were now the only two left, siding with the US.

Sources from Indian delegation say that it is EU’s ploy to break the BASIC.

December 9, 2011 Durban, Friday, 9 am: New draft of the Indaba – the conference declaration, which is being finalized by ministers – has been issued. December 8, 2011 at 10 pm says even less than what previous drafts were listing.

What will be the future task?

Option 1: To develop a protocol to the Article 17 of the Convention or another legally binding instrument under the Convention, and to launch negotiations for this as early as 2012-2013 and to adopt it as early as the next COP (18) or COP 21 (2015).

The EU hardline proposal -- new instrument, but under the article of the climate convention, which allows for new protocols, and to have this done urgently. The original roadmap

Option 2: To complete the agreed outcome under the decision of the Bali Action Plan, with the following options:

a. A protocol or legally binding instrument under the Convention  (EU)

This is a mixed and matched option -- a little bit of all groups.

The difference between the two options is two fold -- one, what will be the framework which will guide the new instrument -- will it be the Framework Convention on Climate Change or will it be the Bali Action Plan, which allows for a three track approach -- legal for some; voluntary and national actions for the rest.

The other issue is if this instrument will be legally binding or will it be a legal outcome? This is the big difference between the EU and the US. On Thursday, the US issued a clarification to say that its special envoy, Todd Stern had said in his press conference today "that the United States could support a process to negotiate a new climate accord. He did not say that the United States supports a legally binding agreement as the result of that process. The EU has supported both a process and the result being a legally binding agreement."

Option 3:  To complete the agreed outcome under Bali Action Plan, through a set of decisions or begin a process to develop a Protocol or other legally binding instrument or arrangement for the period after 2020

BASIC country proposal -- first complete what has been agreed at Bali and then work on a legal instrument for the post 2020 period.

Clearly the battle lines are firmly drawn. Now the question of the next 24 hours is how the countries will flex muscles and reposition themselves to leave with the one decision that this COP is expected to take -- not to combat climate change, but when and how to keep talking about combatting climate change.