A latest study by CSE’s Pollution Monitoring Lab finds antibiotic contamination in honey; investigations by Down To Earth points to double standards in regulations as foreign brands sold in India also have contamination

New Delhi, September 15, 2010: Nectar, a symbol of well-being – the honey that millions buy believing it is pure, natural and healthy - is contaminated with high levels of antibiotics, fed to bees and is bad for our health. This is the finding of a new study done by Centre for Science and Environment’s (CSE) Pollution Monitoring Laboratory, which had earlier tested colas for pesticides and toys for poisonous chemicals.

The study, which tested leading brands of honey, found high levels of antibiotics – from the banned chloramphenicol to broad spectrum ciprofloxacin and erythromycin – in almost all brands sold in the market. The leading Indian honey producers - Dabur, Baidyanath, Patanjali Ayurveda, Khadi, Himalaya – all had two-four antibiotics in their products, much above the stipulated standards. But what is even worse and shows the regulatory double-standards is that the two foreign brands tested by CSE – from Australia and Switzerland – had high levels of antibiotics and would certainly be illegal in their own countries.

“It is clear that foreign companies are taking advantage of the lack of regulations in India. After all, if our government does not care about the health of its people, why should these companies care?” said Sunita Narain, director, CSE, at the release of the study’s findings here today. “We have standards for antibiotic contamination in the honey we export. Government even tests and certifies that exported honey meets health and safety regulations. But we do not have any standards for domestic honey. This is clearly unacceptable.”

Besides the presence of the contaminants, investigations by CSE has also exposed the murky underbelly of the international honey trade, where fraud, deceit and illegal trade practices rule the roost (see Factsheet on international trade for details).

To begin with, two key questions

1. Antibiotics are medicines. So why are they bad in honey?
Studies have pointed out that chronic exposure to antibiotics – doses taken in small amounts on a daily basis for a long period -- can lead to a variety of health problems. For instance, exposure to oxytetracycline, one of the antibiotics tested by the CSE lab, can lead to blood-related disorders and liver injury. But more importantly, antibiotics in honey (and perhaps other foods as well) have the potential to generate large-scale antibiotic resistance, leading to a collapse of healthcare systems and medications (see Factsheet on antibiotic resistance and health impacts).

“Moreover”, asks Chandra Bhushan, deputy director, CSE, “internationally, regulations consider honey to be a ‘natural’ product. We eat it because we believe it will do us good, because it is ‘pure’. So why should we be finding human-made antibiotics in it?”

He adds: “Regulators in the European Union (EU) and the US say antibiotics in honey are ‘unauthorised’ and therefore ‘illegal’, unless there is a standard regulating their levels. India does not have any standards for domestically marketed honey, which gives a good excuse to our regulators to look the other way while public health gets battered.”

2. Where does honey get antibiotics from?
The beekeeping industry uses antibiotics to control and prevent outbreaks of diseases in honeybees, and as growth promoters to increase production. And these antibiotics are finding their way into that spoonful which reaches the householder’s table. This is also because the biodiversity of bees has changed – the Indian bee, more adapted to natural environments, has been replaced by the more productive European bee (Apis mellifera). Simultaneously, the trade of honey collection has also changed – from small producers to large cartels of honey producers – contracting small producers and pushing for high productivity and profits. The business is no longer that of health.

The CSE study
CSE’s Pollution Monitoring Lab, or PML, tested 12 branded honey samples for six antibiotics, and found antibiotics in 11 samples. The tested samples were bought randomly from various markets in Delhi in July 2009. Of the 12, 10 were Indian brands and two were imported brands.

The six antibiotics that PML looked for were oxytetracycline, chloramphenicol, ampicillin, erythromycin, eurofloxacin and ciprofloxacin. Among the domestic brands tested were Dabur Honey of Dabur India Ltd, which holds over 75 per cent of the market share in the branded segment; Himalaya Forest Honey of Himalaya Drug Company, one of India’s oldest Ayurveda drug companies; Patanjali Pure Honey of Patanjali Ayurved Ltd, Haridwar; and Baidyanath Wild Flower Honey of Shree Baidyanath Ayurved Bhavan Pvt Ltd (Kolkata), which has about 10 per cent share in the branded honey market (see table for complete list).

The two imported brands were Capilano Pure & Natural Honey of Capilano Honey Ltd, the market leader in Australia, exporting honey to over 40 countries; and Nectaflor Natural Blossom Honey of Narimpex AG with its production site in Biel, Switzerland.

We’re Indians. We don’t need regulations
What’s strange is the reticence of Indian regulators towards setting and enforcing standards. In India, honey is currently regulated under three legislations:

All three define honey as a “natural product” and lay down standards for its composition and quality (sucrose content, total reducing sugars, hydroxymethyl furfural, moisture content etc) - but there are no standards for antibiotics or other contaminants in honey (see Factsheet on regulations).

The Export Inspection Council (EIC) has however set antibiotic standards for the honey that is exported. This is referred to as ‘Level of Action (LOA)’ - the limit beyond which a sample is deemed non-compliant and rejected for exports. An elaborate system of monitoring (called Residue Monitoring Plan or RMP) has also been put in place, and the EIC, under the Union ministry of commerce and industries, has been entrusted with the task of checking exports.

The country suffers in case of improper monitoring or checks – in June 2010, the EU had banned Indian honey from entering any of its 27 member countries because the consignments were contaminated with antibiotics and heavy metals.

But these monitoring, checks and norms do not apply to honey available in the domestic market. There are hardly any reports on antibiotic contamination of honey consumed within the country. India also imports honey -- but there is no standard to check its quality either. Says Narain: “Food safety regulations are supposed to be monitored by the Food Safety and Standards Authority of India.

But the Authority, despite being in existence for almost four years, has failed to do anything to safeguard consumer health. Says Narain: “In fact, it only works for the benefit of big business to undermine our bodies and our health. Our study on honey is only one indicator of the takeover of our food business and tells us that action is needed fast and urgent. We cannot allow business to be more important than the food we eat.”

Table: Nectar? Not really…
The truth about the honey we consume, as found by CSE’s Pollution Monitoring Lab 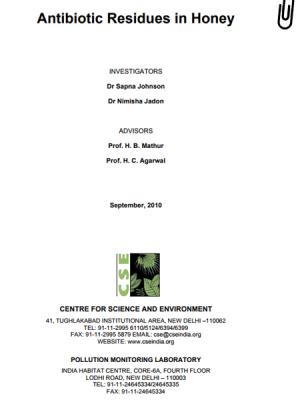 BIS to Study Presence of Antibiotics in Honey

Role of honey in ayurvedic treatment

Honey, what’s in your honey?

CSE’s Pollution Monitoring Laboratory over the years: a decade of public science

Regulations: not working to regulate contaminants

Why antibiotic in food is harmful: creating resistance and indomitable superbugs

International honey trade: the murky side of sweet business