NEW DELHI, May 19, 2015: Centre for Science and Environment (CSE) has welcomed the step taken by the Union Ministry of Environment, Forests and Climate Change (MoEF&CC) to tighten the pollution norms for coal-based power plants in the country. CSE deputy director general Chandra Bhushan said: “We welcome this move. It will have an impact on the pollution caused by the thermal power sector in India.”

Earlier this year, CSE had released its environmental rating of the coal-based thermal power sector, under its Green Rating Project. Forty seven plants – adding up to 55 per cent of the nation’s capacity – were rated: the sector ranked poorly on all the parameters. The CSE rating report – titled Heat on Power -- had recommended tightening of norms to help cut pollution levels (see: Coal Toll).

Of the total pollution from the sector, the coal-based power sector currently accounts for approximately 60 per cent of particulate emissions, 45-50 per cent of SO2 emissions, 30 per cent of NOx emissions and more than 80 per cent of mercury emissions. There are currently no standards to curb emissions of SO2, NOx and mercury. The only standards that exist are for PM, which are quite lax compared with the global norms. The ministry’s proposed changes, if implemented, may go a long way in safeguarding public health and environment, say CSE experts.

What are the proposed standards?
The new standards will be expected to cut particulate emissions from new plants by 25 per cent; SO2 emissions by 90 per cent; NOx emissions by 70 per cent and mercury emissions by 75 per cent compared with the existing state-of-the-art plants. Those plants that were established after 2003 will need to meet slightly lower standards, while plants older than 2003 will be required to meet more relaxed norms. “We believe these lower standards are acceptable given technical and economic limitations in installing pollution control equipment in older units,” said Priyavrat Bhati, CSE’s Director for Green Ratings Project.

Compared with the industry-average, the emissions cut will be significant. For instance, the particulate emission norm for an average Indian power plant is 150 milligram per normal cubic metre (mg/Nm3). Under the proposed standards, a plant installed in 2017 will have to meet a particulate standard of 30 mg/Nm3 – a reduction of 80 per cent.

The impact of pollution from coal-based power generation is known to be disproportionately high. This fact was highlighted by finance minister Arun Jaitley in his budget speech in support of an additional cess of Rs 100 per tonne on coal that will be used to invest in clean generation.

The new norms will require all existing cooling tower-based plants to restrict water consumption to 3.5 cubic metre per watt hour (m3/MWh). Plants which will be set up after January 2017 have to achieve 2.5 m3/MWh. Also, all existing once-through-cooling (OTC) system plants will need to be replaced with cooling tower-based systems that consume no more than 4 m3/MWh. This can have a remarkable reduction in freshwater withdrawal by thermal power plants – cumulatively, freshwater withdrawal will decrease from around 22 billion cubic metre in 2011-12 to around 4.5 billion cubic metre in 2016-17, an 80 per cent dip.

“Water is the lifeline of millions of people. We are happy that much less water will be used by power plants and more will be available to people. Taken together, these constitute a significant attempt on controlling pollution and water use by this key sector,” said Bhushan.

Final norms are expected to be announced after a 30-day comment period. 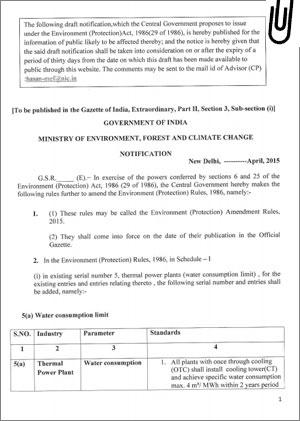