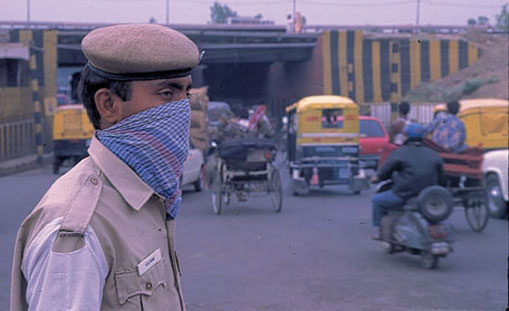 New Delhi, April 6, 2015: Centre for Science and Environment (CSE) has welcomed the release of the much-awaited national Air Quality Index (AQI). The AQI will be used to inform people about daily air quality and to provide advisories on health consequences. It will tell how clean or polluted the air is, and what associated health effects might be of concern. This can help people take precautions on ‘bad air’ days.

The AQI was released here today by prime minister Narendra Modi. CSE has been demanding adoption of this Index for a long time.

Anumita Roychowdhury, executive director in charge of the clean air and sustainable cities programme in CSE, says: “For the first time, the government has taken the initiative to inform people about daily air quality with simple descriptions that people can understand. It is cautioning them about possible health consequences. This can help build public awareness as well as public support for hard decisions needed to get cleaner air.”

The new AQI has been hosted on the website of the Central Pollution Control Board. About 10 cities that have the capacity for real time air quality monitoring are expected to be linked – a continuous 24-hour average data will be available daily from them. The AQI has been developed for six pollutants – PM2.5, PM10, nitrogen oxides, sulphur dioxide, ozone, and carbon monoxide.

Air pollution levels have been classified in six bands with simple descriptions to help people understand. Each band has cut points of concentration with a colour code to visually express the level of severity that people can comprehend easily. Air quality is classified good if the pollution levels are at least 50 per cent below the regulatory standards.

The government is also making efforts to inform people about the health consequences of air pollution. For instance, good air quality days mean minimal health impacts. But on ‘moderately polluted’ days, it may cause breathing discomfort in those suffering from lung or heart diseases. On severely polluted days, pollution may cause respiratory effects even in healthy people and serious health impacts in people with lung disease. The ministry has also taken additional steps to report on two toxic pollutants – lead and ammonia -- that also have harmful effects over time.

CSE has applied the national Air Quality Index to PM2.5 levels recorded by the air quality monitors of Delhi Pollution Control Committee from October 2014 until March 2015. It shows:

• Number of days with severe levels – the worst category -- has remained consistently high all through. In December, 65 per cent of the days were in severe category; in January, it was about 47 per cent.

• Globally, a smog episode is defined as three consecutive days when the pollution levels are elevated and remain in the worst category of the Air Quality Index. When CSE applied the criteria to the city’s pollution levels, it found there were at least 12 smog episodes this winter! This is a critical situation -- in other countries, if cities are afflicted in a similar manner, immediate steps are taken to reduce car numbers, shut industrial units, and close down schools.

• Post-winter, as pollution peaks tapered off to some extent, the share of days with severe pollution levels declined. In March 2015, despite the rains, about 17 per cent of the days were in ‘poor’ and 30 per cent in ‘very poor’ categories.

• It is also possible to have ‘good’ air days when pollution levels dip to 50 per cent below the standards. In March, 7 per cent of the days had good air quality. Cities need to act to increase the number of good air days, says CSE.

With this step forward, India has joined the global league of countries like the US, China, Mexico, France and Hong Kong that have implemented smog alert systems. These countries not only issue smog alerts, but also implement pollution emergency measures to bring down the peak pollution levels. Indian cities need the same roadmap.

• Beijing: Similar public information system on air quality and health alert in Beijing has helped build public awareness that has catalysed several changes. Beijing has also come up with a pollution contingency plan. On red alert days, kindergartens, primary and middle schools will close; about 80 per cent of government-owned cars would be taken off the roads; private cars would only be allowed on alternate days according to numbers plates; freight vehicles and those transporting material for construction sites would be barred; polluting factories will cut their emissions or shut down completely when the orange warning signal is issued; construction sites will halt excavation and demolition operations, and barbeques and fireworks would be banned on heavily polluted days. The 2013 smog forced Chinese cities to close some of the large factories. Smog episodes in Beijing have also led to restrictions on highway movement. In some provinces, smog episodes have forced schools to suspend classes. People were advised to wear masks. Local governments in China are now liable to pay a fine if air pollution levels hit the critical mark.

• Paris: Recently, in March 2015, the air quality index rose in Paris. To control the problem, the city made public transport free and removed almost 50 per cent of the vehicles off the road. The alternate number plate system was implemented once again to keep cars having number plates ending in odd and even digits off the roads on alternate days. Lorries were asked to drive at 20 km/hour speed to reduce emissions of micro particulate matter and police was deployed to fine motorists breaching the partial driving ban. Public transport was made free over the weekend to get the public to use buses and trains and share bikes. The city also adopted alternate vehicles system -- allowing cars with either odd or even number plates to ply on alternate days. Paris does not allow diesel cars on smoggy days, minimizes combustion of high sulphur fuels in industry and curtails industrial operations. On polluted days, Paris authorities recommend drivers to postpone trips to Paris or bypass the city;

• In US cities, Rule 701 of air pollution emergency contingency actions (for PM and ozone) states that during stage 2-3 level of alert, school officials and local and state law enforcement agencies should be informed; public safety personnel should discontinue prolonged, vigorous outdoor exercises lasting longer than one hour; and those with heart or lung disease should be informed to avoid outdoor activities. Industrial units are asked to reduce combined emissions by at least 20 per cent of normal week-day operations. The Rule also asks to reduce fleet vehicle miles traveled by at least 20 per cent of normal week-day operations; promotes ridesharing and telecommuting; bans burning of liquid or solid fossil fuel in electric power generating systems unless a force majeure natural gas curtailment is in effect; and recommends all non-emergency driving to be discontinued.

• London: On March 17, 2015 there was high air pollution warning in London. All vulnerable children and adult groups with lung and heart problems were asked to avoid outdoor activities. Government gave some tips to reduce pollution, which included car-pooling and switching off engines while not in use. The mayor launched an air quality campaign -- Breathe Better Together.

• Mexico: Phase I pollution alert requires cutting down of 30-40 per cent of industrial pollution; stopping 50 per cent of government vehicles from plying; banning most polluting vehicles (alternative fuel vehicles are exempted from restrictions). In phase II alert, schools are closed, and one-day-a-week ban on vehicles is extended to two days. Phase III alert leads to closing down of industry in addition to the other curtailments.

Good step forward, but now we need the next steps

The newly released Air Quality Index is an important step forward to build awareness and protect public health. But it is time to push for aggressive and time-bound action in Delhi and other Indian cities to meet clean air standards and reduce the public health risk.

• Initiate a public awareness campaign to build support for difficult air pollution control action as well as pollution emergency measures that are needed now to address this public health crisis.

For more on this, please contact Souparno Banerjee, 9910864339, souparno@cseindia.org.