In line with the discussion paper on NEPA dated May 25, 2010, theconsultative process has been taken forward. A clearer picture isemerging on the mandate of NEPA as a structural response along withprocess refinements to address the various issues. It is a part of the largeragenda of environmental regulatory reforms. The aim of this DiscussionPaper is to invite comments from the civil society and other stakeholdersregarding the issues mentioned in the paper.

Rapid industrialization and infrastructure development in the lastdecade coupled with population growth and urbanization has exertedtremendous pressures on the environment. The existing regulatoryinstitutions at the Central and State levels have been unable to cope upeffectively with the rising environmental challenges. It is now wellrecognized that the hiatus between the environmental statutes and theircompliance is becoming wider.

It is apparent that the traditional systems of command and control for environmental regulation have beenstretched to their limits. The mechanism of criminal prosecution ofenvironmental offenders has also failed to yield the desired results.

The regime of environmental clearance which took shape under theenvironment impact assessment notification under the Environment(Protection) Act, 1986, involves grant of prior clearance to major projectsby MoEF and to relatively minor projects by State Environment ImpactAssessment Authorities (SEIAAs). While the number and complexity ofthe projects being processed for environmental clearance has increased 3manifold, the capacity and resources available with MoEF and itsagencies to manage them have remained limited. 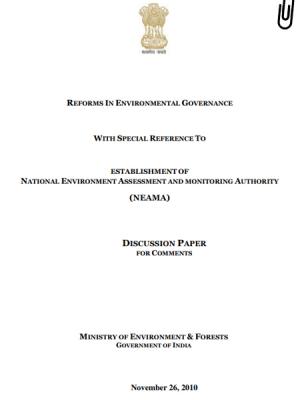