The impact of the watershed programmes have not only resulted in ecological restoration but also yielded economic returns for the communities. In village Bagroda of Bhopal district, the watershed mission initiated work in 2006, covering a total area of 1,275 hectares with a project cost of 65.03 lacs. In the four years of the project, a sum of 43 lacs have been spent in creation of 6 percolation tanks, 5 ponds, 10 boulder check dams, 6000 contour trenches, plantation of 57000 saplings and fodder development in 10 hectares.

Water conservation measures have resulted in increase in the water level from the 65 m in 2005 to 43 m in 2010. The watershed committee comprising of 12 members (comprising 3 women members) is working with the panchayats to maintain the assets created and meets periodically to review the work and plan for future.  Bagroda has 13 handpumps, all of which are now yielding water all through the year, quite different from the scenario when 4-5 handpumps used to go dry after March. Women of the village would happily say that, “watershed work in their area has reduced their burden of fetching water from an open well, 2 km away during the months of March-June.

The villagers have used the National Rural Employment Guarantee Act (NREGA) for renovation of traditional tanks adding to the efforts of the watershed mission. Semrikhurd village, neighbouring Bagrodia had a traditional tank which was designed by Mungiabai, a villager who was revered in the area. Mungiabai also constructed a temple near the pond so that the sanctity of the tank is maintained. 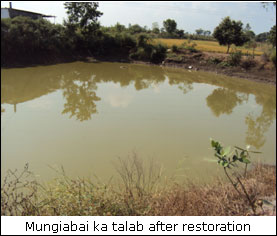 Across the years due to inadequate upkeep the tank was rendered of no use due to silting. Earlier in the year the panchayat decided to revive the tank which will serve as a source of water for there livestock and will help recharge the groundwater. “We planned for the deepening of the pond as part of NREGA,” says the sarpanch of the village and made a plan for the same. The tank was revived to its original glory with people contributing in form of labour working under the NREGA and the panchayat using its fund for plantation activities around the tank for soil conservation.
(Mungiabai ka talab after restoration)

The tank was inaugurated by the Md. Hamid Ansari, Vice President in July giving a boost to the efforts of the villagers. “We shall protect the tank now and will not let it dry,” exclaim the people of Semrikhurd.

Bijesh Patel, a farmer and the secretary of the watershed committee is now growing paddy in his fields. He claims, “I used to grow soybean in my fields during the Kharif season and limit myself to growing pulses in Rabi due to the non-availability of water. However, after the construction of the percolation tanks and stop dams in and around my village, my borewell yields un-interrupted water all through the year. I now grow wheat during the Rabi season and this year I have planted paddy in 0.5 acre of my field.” The yield that Bijesh has got from his 0.5 acre of land is 15 quintal of usha basmati which will fetch him Rs. 30,000 from the market (@ Rs. 2000 per quintal). He is now considering planting paddy to further enhance his income.