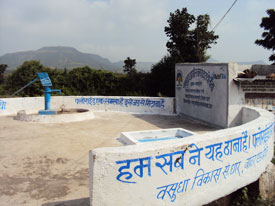 An open dug well was covered and made into a sanitary well, as a safe alternative to flouride affected hand pumps.

Owing to overdraft of groundwater in Dhar, Madhya Pradesh, over 50% of the population was affected by fluorosis. Health problems of bones, teeth and stomach were severe. When the Public Health and Engineering Department would close flouride affected handpumps without any awareness generation about the problem, villagers would react with anger as no alternate sources would be provided. “Lack of awareness was a big hurdle, people wouldn’t understand that water from the handpump is not safe. But with consistent efforts, today every villager is aware of the problem and safe water is available to us from a sanitary well”, Ramu Bai, head of the Village Water Committee (VWCs) in Bahadra Village, explained. After the formation of this committee, handpumps have been marked as fluoride affected and are used for washing and bathing only. Pre and post monsoon testing ensures a check on water quality, which they hope to improve by rainwater harvesting in the coming years. Monthly financial contributions by households are used for maintaining the system, which is operated by the VWC. 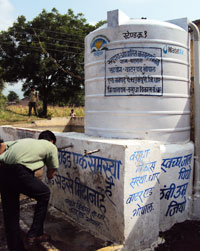 In Kalikeraye Village, Parvat Bhai donated his well to be used by the entire village as that was the only safe source. “The health of the village is more important than irrigating my fields”, Parvat Bhai believes. He is also the operator of the system. The impact of this change has not been felt on health alone, but also on gender empowerment and community mobilisation. “Earlier women did purdah and were illiterate, but after becoming members of the VWC, we have become quite fearless and educated as well”, Ramu Bai claimed.

The initiative kick-started with the intervention of Vasudha Vikas Sansthan in 2008. It took them nearly 2 years in most villages to mobilise village communities and form VWCs after raising awareness about the health issue. “It is vital to generate a community sentiment within the village, as that alone assists them in resolving their problems”, people at Vasudha believe.